Water is an essential resource that supports all human activity, including corporate activities. However, saltwater makes up the majority of the earth’s water resources, and the amount of fresh water available for use by humans is extremely limited. Regions across the world are facing water resource problems such as water shortages brought on by population growth and increasing competition for available fresh water. Water resources are also unevenly distributed across countries and regions.

Furthermore, it is expected that local communities and businesses will increasingly be impacted moving forward due to the emergence of physical risks such as the changes in rainfall patterns caused by climate change.

Sojitz Group develops a wide range of business in a multitude of countries and regions around the world, and it therefore recognizes the importance of conservation and sustainable use of water resources. Sojitz has declared its commitment to “develop, use, and supply sustainable resources” as part of its Key Sustainability Issues (Materiality) and the Sojitz Group Environmental Policy promotes the recycling and the conservation of natural resources, including water.

Sojitz implements initiatives for reducing its water usage based on these policies and conducts regular checks to monitor the impact of water risks on Sojitz business. Sojitz also strives to provide solutions to water-related social issues through its business.

In addition to preparing for transition risks brought on by new regulations aimed at mitigating climate change, we are also planning ways to address physical risks in the event that climate change cannot be avoided and global warming continues to progress. To begin with, we are primarily focusing on water-related physical risks, such as damages to assets from floods and droughts. During Medium-term Management Plan 2020, we first surveyed the status of actions taken to address water stress by Sojitz Group’s top water users and confirmed that there were no problems with their on-site measures or with their systems for reporting to Sojitz headquarters. Moving forward, we will take steps to address other physical risks our its business. Sojitz is also engaged in initiatives for the conservation of natural resources, including water, and recycling.

The Sustainability Committee, chaired by Sojitz’s president and CEO, deliberates on all environmental initiatives, including water resource-related matters. The committee reports its conclusions to the Management Committee and the Board of Directors, which provide supervision and instruction.

Deliberation on all business investments and loans require projects to be analyzed and evaluated for all environmental and social risks, including water resource risks. A project’s value must be confirmed from a sustainability perspective prior to resolution.

The Corporate Sustainability Office is a dedicated body that supports the entire deliberation and evaluation process and is in charge of implementing directives from the Sustainability Committee. The office reviews all investment and loan proposals discussed by the Finance & Investment Deliberation Council from a sustainability perspective, including with regard for water resources.

Sustainability Committee Members(Current as of April 1, 2022)

Sojitz Group uses Aqueduct, a tool for analyzing water risk developed by the World Resource Institute, to carefully analyze all water-related risks, including potential damages to assets caused by floods and droughts.

During Medium-term Management Plan 2020, we first surveyed the status of actions taken to address water stress by Sojitz Group’s top water users and confirmed that there were no problems with their on-site measures or with their systems for reporting to Sojitz headquarters.

Moving forward, Sojitz plans to conduct regular checks to monitor the impact of water risks on Sojitz business and disclose the results of quantitative surveys it conducts.

Prior to deliberating on new investment and loan projects, Sojitz requires the department applying for investment and loan approval to complete an “Environmental and Social Risk Checklist.” Using the checklist, the department confirms that they have conducted the required due diligence and taken all necessary measures to deal with potential environmental risks, such as impact to biodiversity; soil, groundwater, or water contamination; impact on water resources in water-stressed regions; and impact on indigenous peoples.

Sojitz has entered the natural-gas power and desalination business in the Emirate of Abu Dhabi, United Arab Emirates, a water-stressed region.

In May of 2021, Sojitz acquired a 20% stake in Mirfa International Power and Water Company (MIPCO), which operates the Mirfa Independent Water and Power Project in the Emirate of Abu Dhabi, United Arab Emirates. The company acquired all shares in MIPCO held by SHUAA Capital, a major asset management and investment firm in the Emirate of Dubai. Sojitz will start business operations together with existing shareholders Abu Dhabi National Energy Company PJSC (TAQA), one of the largest integrated utilities companies in the EMEA region based in Abu Dhabi, along with ENGIE SA, a major French energy company with extensive experience in the development and operation of large-scale IPP/IWPP projects around the world.

The project consists of natural gas-fired power facilities which have a generation capacity of 1,600MW and desalination facilities which have a desalination capacity of 52.5 million imperial gallons per day. Sojitz and its partners own and operate the power and desalination plant. All electricity and water produced by the plant are sold to Emirates Water and Electricity Company under a long-term power and water purchase agreement over the remaining contract period of around 22 years. Sojitz seeks to provide a stable supply of electricity and water in Abu Dhabi where demand is increasing in response to economic development utilizing natural gas which is an environmentally friendly fossil fuel with a lower environmental burden of combustion compared to other types of fossil fuels used for thermal power plants.

Initiatives within our Textile Business

Water is an essential part of textile processing. Sojitz Group company Daiichibo Co., Ltd. has obtained ISO14001 and implemented a number of initiatives dedicated to greater consideration for the environment. Among these initiatives are efforts which aim to reduce water consumption.

Generally, spinning factories are extremely hot inside due to the heat emitted by the spinning machinery. Air conditioning is essential to ensure stable product quality and create an environment amenable to workers. This air conditioning uses mass volumes of water.

The dyeing factory also uses a lot of water. Before dyeing the knitted fabric, it needs to be washed of starches and oil. The liquid dye itself needs to be boiled at a high temperature. Large amounts of water are essential to both of these processes.

Rather than dispose of the water used to regulate the temperature in the spinning factory, Daiichibo has it drained into a fire cistern, then rerouted to the dyeing factory. In this way, not a drop is wasted.

This initiative shows consideration for effective water usage, having it play a key role in air conditioning, fire safety, and dyeing. Through these efforts, Daiichibo is aiming to cut water usage by 3% year-on-year. 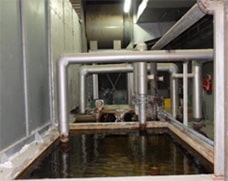 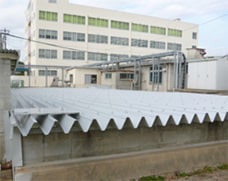 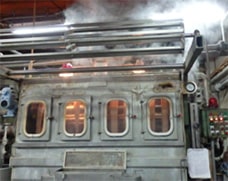 Initiatives within our Fertilizer Business

Additionally, the fertilizer mixing process uses water. The water used in this process is the same water used to collect the aforementioned dust particles. In this way, JVF recycles water within the facility to create a factory with zero water discharge. 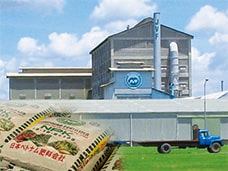 Cooperation with Our Stakeholders

Sojitz is a member of the Japan Foreign Trade Council’s Global Environment Committee and is actively involved in the creation of a recycling-based society, including through management of water resources.