Sojitz Corporation (“Sojitz”) has invested in a Kyushu University-based start-up, KAICO Ltd. (“KAICO”), through a third-party allotment of shares. KAICO uses the silkworm insect species to express recombinant proteins, which are then used for the formulation and development of medical products and to support manufacturing, primarily through provision of contract protein expression services*¹ for the development and production of hard-to-express proteins for animal and human vaccines.

In 2019, Sojitz began the Hassojitz Project to realize innovative ideas as new business projects, and the company continues to actively pursue new initiatives for business creation. This investment project first originated as an idea from the junior employees in the Consumer Industry & Agriculture Business Division’s Food Innovation Task Force.

KAICO is a CDMO*² that specializes in silkworms, and the company provides contract protein expression services as a partner to pharmaceutical companies in addition to engaging in the development of proteins engineered for the development of reagents, diagnostic agents, and vaccines. In order to realize a profitable business model, KAICO uses seed capital for production and earns completion incentives in the process of production and development while continuing to supply proteins as raw materials once products have launched. 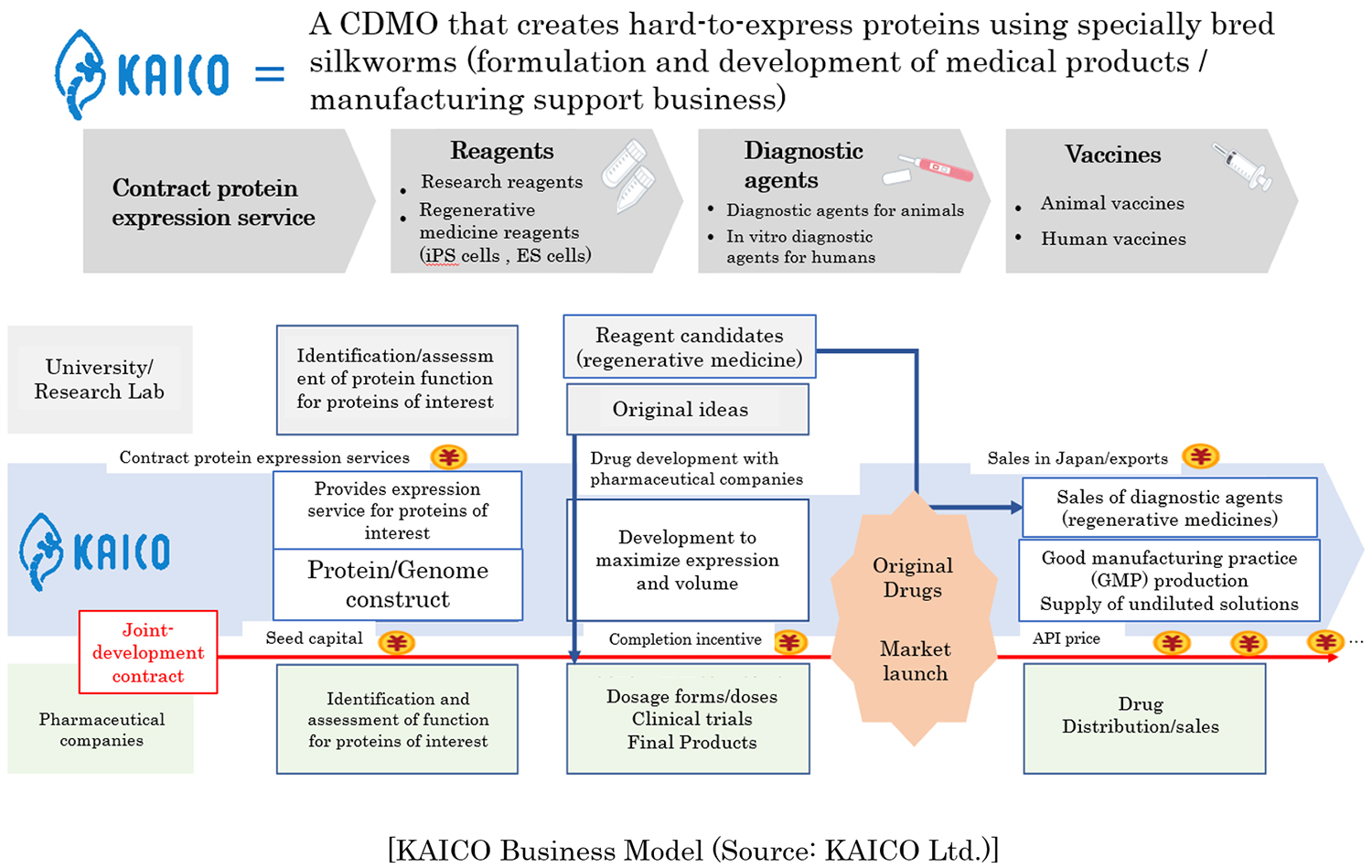 KAICO utilizes its extensive genomic know-how to produce safe, high-quality medical-use proteins that are close to natural proteins for use as raw material in pharmaceuticals. The company makes use of over 450 types of inbred strains of silkworms from subcultures and preserved genetic stock from Kyushu University, which boasts over a century of genetics research and silkworm breeding. KAICO utilizes specially bred silkworms that have 3 to 10 times the expression rate and production rate compared to the average silkworm. Importantly, these silkworms can express and produce proteins of interest, *³ making it possible for one silkworm to produce enough raw material to manufacture vaccines for inoculating as many as 500 pigs. Additionally, this past April KAICO accelerated R&D for a protein discovered as a potential raw material for use in manufacturing effective oral animal vaccines. As the company is able to develop a wide variety of proteins simultaneously in small batches, target proteins can be produced in as quickly as two months. With this advantage, KAICO has successfully developed the antigen for the Covid-19 spike protein*⁴ and began commercial production and sales of antibody detection kits*⁵ from September for people who have already received their Covid-19 vaccines.

In Sojitz’s food business, the company has positioned Asia as a major growth market of focus as part of a recognized global megatrend. The company is working to expand and strengthen its earning power through stable supply of meat products in the region. However, in recent years, livestock production sites and fisheries in developing countries have faced pressing issues such as rising economic losses from the outbreak of disease and a decline in workers in primary industries. These issues in the food sector have underscored the need for technological innovations to raise production efficiency.

Sojitz and KAICO will leverage KAICO’s advanced technologies together with Sojitz Group’s functions and networks to support the expansion of KAICO’s services and functions both in Japan and overseas. Through this partnership, Sojitz and KAICO aim to provide highly effective animal vaccines at a low cost to livestock production sites and fisheries in developing countries in order to contribute the sustainable development of primary industries in Asia.

*1: Contract protein expression service: KAICO provides protein expression services to R&D departments at pharmaceutical manufacturers on a contract basis. The company utilizes silkworms and proprietary technology to produce proteins of interest for the raw material used in the production of diagnostic agents and other products.
*2: CDMO: Contract Development and Manufacturing Organization
*3: Proteins of interest: Proteins that become the raw material for diagnostic agents and other products that are developed through contract protein expression services provided to R&D departments at pharmaceutical manufacturers.
*4: Spike protein: A surface protein found on the Covid-19 virus that projects outward that allows the virus to invade human cells.
*5: For further details regarding KAICO’s antibody detection kits for vaccinated individuals, please refer to KAICO’s news release.