Companies must not concern themselves with the pursuit of profit alone; rather, they are expected to develop their businesses while conducting themselves in accordance with social norms and contributing to society. Sojitz believes that thorough compliance is essential to meeting these expectations. We focus on instilling and establishing a compliance mindset among employees while making a Company-wide effort to enable cooperation and teamwork through daily communication among employees. However, there are no shortcuts to establishing corporate compliance.

Publicizing and Establishing the Compliance Mindset

The Sojitz Group’s Corporate Statement is honored through the Sojitz Group Code of Conduct and Ethics—a set of decision-making standards established to act as the foundation for all of Sojitz Group’s business activities around the world. The Sojitz Group includes many operating bases outside Japan, and therefore actively works to enhance understanding and practice of compliance not only in Japan, but at the global level. The Code of Conduct and Ethics has been translated into 23 languages, including Japanese and English to enable all Group employees in Japan and overseas to acquire a shared compliance mindset. 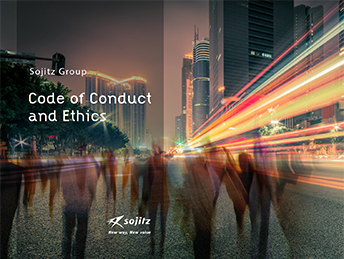 The Compliance Committee, chaired by the Chief Compliance Officer (CCO), is at the core of activities to ensure adherence to laws, regulations and corporate ethics, in cooperation with the head office, consolidated Group companies, overseas sites and other parts of the Group. Compliance supervisors and assistants have been assigned to Sojitz’s domestic and overseas operating bases and consolidated Group companies in order to install a framework for compliance response at each office and promote educational activities and training programs, including those for locally-hired employees.

Sojitz has also set up compliance committees in each of the four regions, which run committee meetings and carry out local compliance activities overseas. In addition to these initiatives, Sojitz promotes a shared awareness of compliance and regularly exchanges views on future policies through various channels, such as meetings between the CCO and the presidents of each division and consolidated Group companies and conferences among the compliance officers of domestic consolidated Group companies.

To help prevent and detect compliance violations early on, all Sojitz Group employees are made well aware of the Company hotline (reporting system) that provides access to the CCO and outside legal counsel; a consultation desk where Compliance Committee Secretariat members can be contacted; and the multi-lingual Sojitz Ethics Hotline, which is available 24 hours a day, 365 days a year.

There were no serious violations of laws or regulations, including cases of corruption such as bribery, cease and desist orders from the Fair Trade Commission or other government agencies, suspension of operations or business due to misconduct, criminal charges due to compliance-related incidents or accidents, or detection of overseas price cartel incidents.

In Sojitz Group’s Code of Conduct and Ethics, we disclose cases of violations of laws and regulations that may have a significant impact on Group operations, as well as details of our actions taken in response to those violations. Depending on the nature of other violations, we will take strict measures such as the following, including disciplinary action, to prevent recurrence.

・Establishing a Group-wide system to ensure compliance with laws and regulations and adherence to corporate ethics
・Conducting awareness-raising and training activities, including for locally hired employees
・Acquiring ISO37001, TRACE International, and other certifications

Compliance Hotline
Sojitz has set up the compliance hotline below for parties both inside and outside the organization to report any known or suspected violations of law or the Sojitz Group Code of Conduct and Ethics by Group companies or individual Group employees.

In FY2021, 65 cases were called in through Sojitz’s compliance hotlines.

In recent years, the United States and other countries have tightened regulations against corrupt practices such as bribing or improperly giving gifts to foreign public officials, and the level of standards demanded for prevention of corruption is increasing globally.

Sojitz formulated anticorruption rules in December 2012 and set out methods for preventing corruption in April 2013. Since then, the Company has implemented full-scale initiatives starting with the head office, where it began conducting e-learning focusing solely on the prevention of corruption, employee training regarding enforcement of its anticorruption rules, and other initiatives in May 2013. At the same time, the Company began screening gifts, entertainment and engagement of agents and other third parties, etc. that pose a high risk of corruption.

Information pertaining to legal violations in Japan and overseas for FY2021 is listed below.
・Number of cases of discovered bribery: 0
・Amount of fines imposed for violation of anti-corruption laws: ￥0

Reporting to the Board of Directors

A report is made each year to the board of directors on compliance measures (including anti-bribery initiatives), any instances of compliance violations, and compliance policy for the applicable fiscal year.

Sojitz, in developing Sojitz Group’s business worldwide, strives to execute its tax obligations in a timely and appropriate manner.

The Sojitz Group regards the possibilities of a loss of trust in the Sojitz Group, legal fines and penalties, prohibition or restriction of transactions such as exports, the loss of transactions with investors and business partners, and an inability to conduct transactions in certain markets and regions as a result of a violation of these laws and regulations as serious risks. We have, therefore, established a system to prevent these risks from occurring.

[System and Specific Initiatives]
1. Commitment and Structure
The Sojitz Group has established the "Sojitz Group Code of Conduct and Ethics" pursuant to which officers and employees are required to conduct their business activities with a full understanding of and in compliance with the laws and regulations that protect the common good of maintaining international peace and security. In addition to this, the "Sojitz Sanctions and Export Controls Policy" has been established wherein the president of our company first declares that the Sojitz Group firmly opposes the development of weapons of mass destruction and other security threats for the sake of international peace and security, and will comply with the laws and regulations related to export controls and sanctions. This Policy further establishes our basic policy with respect to systems and initiatives for compliance.


The Sojitz Group has established the Security Trade Control Committee (“Committee”), which is chaired by a representative director of the Sojitz Corporation. The Legal Department has been designated as the secretariat of the Committee, and security trade control teams have been established within the Legal Department at the Sojitz Corporation and within the Sojitz Group companies. These teams formulate policies and objectives related to security trade control, establish systems for implementing these policies, and formulate and roll out various measures while overseeing their implementation.

2. Risk Assessment
The Sojitz Group considers that the following activities could create the serious risks mentioned at the beginning of this announcement, and it periodically evaluates these risks and reviews and examines countermeasures against them.

When a risk is detected, it is immediately analyzed, the necessary measures are considered, and actions are taken such as the immediate suspension of transactions, the termination of contracts, and notification to the relevant authorities.

3. Internal Controls
In the Sojitz Group, each company has formulated its own internal compliance program based on the "Sojitz Sanctions and Export Controls Policy" and has formulated and implemented specific procedures for conducting security trade control. At the Sojitz Corporation, for example, when conducting exports and other transactions, approval must be obtained from a committee member in charge of transaction screening or the general manager of the Legal Department who has been delegated by the chairman of the Committee. In addition, when making investments, approval procedures are required in accordance with internal rules, and the Legal Department participates in these procedures as a deliberator to analyze, evaluate, and consider countermeasures against security trade control risks.

The "Sojitz Sanctions and Export Controls Policy" and the internal compliance programs are made known to all officers and employees through the company intranet and in-house training.

5. Training
The Sojitz Group conducts training in accordance with the "Sojitz Sanctions and Export Controls Policy" and the internal compliance programs.

The Legal Department of the Sojitz Corporation and the security trade control teams in the Sojitz Group companies design, plan, and conduct this training.