The Riyadh PP11 independent power project (IPP) that Sojitz Corporation is implementing in a consortium with the GDF Suez Group, one of the world’s leading gas and power electric companies, Al Jomaih Holding Company, a leading Saudi conglomerate, and the government operated Saudi Electricity Company (SEC) was completed and began commercial operation on March 12 (local time).

The Riyadh PP11 is a 1,729 MW gas-fired combined-cycle power generation plant located 125 km to the west of Riyadh, the capital of Saudi Arabia. The power plant will sell electric power on a wholesale basis under a long-term, 20-year contract entered into with SEC.

The combined-cycle method uses both gas and steam turbines. Its main features are minimal environmental impact and excellent fuel efficiency. In Saudi Arabia, most power plants are oil-fired, taking advantage of the country’s abundant oil resources, but in recent years demand for electricity has been increasing rapidly, resulting in calls for diversification of energy sources and higher efficiency. Greater consideration is also being given to the environment and expectations for Riyadh PP11, which uses the combined-cycle method, are high. 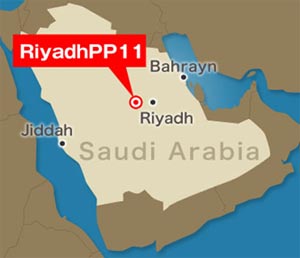 Sojitz has supplied transformer and distribution equipment to SEC for more than 30 years. This project, Sojitz’s first IPP in the Middle East, has served to strengthen Sojitz’s ties with SEC even further. Sojitz has positioned IPPs as a key area for long-term and stable revenues and plans to strengthen and expand its participation in such projects. Sojitz will focus on IPPs in Gulf countries of the Middle East and in Southeast Asia