Sojitz Marine & Engineering Corporation, a wholly-owned shipping subsidiary of the Sojitz Corporation, will invest approximately US$1.8 million in Ecochlor, Inc., a US-based maker of ballast water treatment systems. Sojitz Marine & Engineering will also acquire Asian dealership rights for Japan as well as China, South Korea, and Taiwan and will build and reinforce sales structures throughout Asia, a region where demand for such systems is increasing. 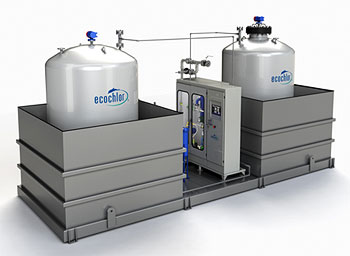 Ballast water is seawater that is taken on as a way to serve as ballast to stabilize the vessels after the vessels unload their cargoes. When the seawater taken on in one region of the sea is discharged at the destination port, there is a risk of harm to the local marine ecosystem, and the issue of ballast water is attracting attention as a global marine environment problem.

The Ecochlor BWTS sold by Sojitz Marine & Engineering processes of ballast water in two stages-by filter and with chemicals. The main sales targets are medium-size and larger vessels with the ballast tanks of at least 25,000 m3 (vessels with the deadweight tonnage* of 70,000 tons or more), but the system has a wide range of processing capacities from 250 m3/hour (vessels with the deadweight tonnage of 10,000 tons) to more than 10,000 m3/hour (vessels with the deadweight tonnage of 300,000 tons) and can be installed on a wide range of vessel types including both new and existing ships. In December 2011, the Ecochlor BWTS received certification from BSH (a German governmental agency) as a product complying with the regulations of the International Maritime Organization (IMO). In addition, the Ecochlor BWTS have already received certification under the United States Coast Guard (USCG) Shipboard Technology Evaluation Program (STEP), which is even stricter than the IMO standards, and two vessels have already been approved. Sojitz installed the system on its MV “Buenos Aires,” which was completed in December 2011 (a Panamax class bulk carrier with a deadweight tonnage of 83,000 tons).

The IMO adopted the International Convention for the Control and Management of Ships’ Ballast Water and Sediments (Ballast Water Management Convention) in 2004. The convention will come into effect one year after ratification by 30 IMO member countries representing at least 35% of the world’s merchant shipping tonnage.

Currently, the convention has been ratified by 33 countries representing more than 26% of the world’s merchant shipping tonnage, and it is expected that the conditions for the convention to come into effect will be satisfied soon. When it comes into effect, approximately 60,000 vessels will be required to install ballast water treatment systems.

As a result of these international regulatory developments, it is expected that the global market for ballast water treatment systems will grow to approximately 2 trillion yen. Today, Japan, South Korea, and China account for more than 80% of the world’s shipbuilding orders. Sojitz Marine & Engineering will build a sales network in Asia in anticipation of the convention coming into effect and has set a target of selling systems for approximately 900 vessels including both new and existing by 2019.

* Deadweight tonnage: A measure of the maximum freight capacity of a ship