Sojitz Marine & Engineering Corporation, a shipping subsidiary of the Sojitz Corporation, is gearing up for a full-fledged advance into sales of ballast water treatment system. Behind this decision is the success of Sojitz Marine & Engineering in acquiring dealership rights domestically in Japan for the “Ecochlor Ballast Water Treatment System (BWTS)” marine use ballast water treatment system manufactured by Ecochlor, Inc. of the United States. The first one of these systems for Japanese market will be mounted on an 83,000dwt Panamax-type bulk carrier owned by Sojitz that is scheduled for completion at the end of 2011.

The Ecochlor BWTS to be sold by Sojitz Marine & Engineering is engineered to treat ballast water by using filters at the primary treatment stage, followed by chemical disinfecting with a chlorine dioxide solution generated by mixture of sulfuric acid and chemicals, “Purate” on board the ship. This system is distinguished by a stellar level of safety, elimination of the need for neutralizing agents when discharging ballast water outside the ship, as well as low maintenance costs, power savings stemming from the chemical processing method. Being compatible with explosion protection specifications, furthermore, allows the system to also be mounted on tankers. In terms of ballast water treatment capacity, a wide lineup offers models ranging from 250m3 per hour to 10,000m3/h performance. The extremely simple structure also ensures installation in a minimum of space, while also shortening system installation time as well. As a result, the Ecochlor BWTS is a superb choice for use on both new and currently existing ships.

Ballast water is used to stabilize vessels at sea, and is taken on in ports where cargo is unloaded and discharged in ports where new loading occurs. Due to its destruction of the ecosystem balance, however, this water has come to be viewed as a global-scale problem for the marine environment. In February 2004, for example, the International Maritime Organization (IMO) adopted the International Convention for the Control and Management of Ships' Ballast Water and Sediments (also known as the “BWM Convention”). When this convention goes into force, all ships navigating waters around the world will be required to be equipped with ballast water treatment systems. Sojitz is thus taking the initiative before the IMO convention takes effect to outfit its own ships with cutting edge ballast water treatment systems.

The Ecochlor BWTS achieved final approval in September of this year at the sixty first session of the IMO Marine Environment Protection Committee (MEPC61). The system is slated to complete the last phases of onboard testing next January, and then obtain IMO type approval from the competent authorities in Germany two months later in March. The system is also designed to satisfy the stringent standards of the United Sates Coast Guard, which demand even higher levels of performance and safety than the IMO standard.

Over the years to come, the global ship-use ballast water treatment system business is projected to expand to a market scale of some 2 trillion yen. At Sojitz Marine & Engineering, the goal has been set to achieve annual sales from such system of between 20 and 30 billion yen three years after the IMO convention goes into effect. 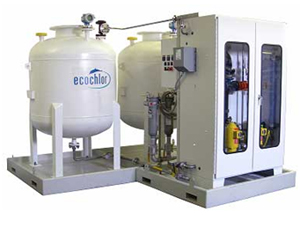