Map of the Caofeidian Industrial Zone and the surrounding area

The Caofeidian Industrial Zone is positioned at the center of the Bohai Rim, an area that is undergoing rapid development, and has been designated a national recycling-based economy model city. Among China’s new industrial zones, expectations are very high for Caofeidian as a zero-emissions eco-city. The industrial zone encompasses approximately 310 square kilometers, and an environmentally-friendly industrial city is now being constructed. Caofeidian links northern China with the Chinese interior as well as Mongolia, Central Asia, and Pacific rim countries including Japan and South Korea, and is located at a key logistics base for various energy and mineral resources. Caofeidian is a massive project, with plans calling for investment of approximately 5 trillion yuan (approximately 65 trillion yen at an exchange rate of 13 yen per yuan).

Sojitz became the first foreign company to invest in Caofeidian when it established Tangshan Caofeidian Sojitz Starway Composite Pipe Co., Ltd. in 2008 to manufacture and sell drainpipes. Tangshan Caofeidian Infrastructure Construction Investment Company provided 5% of the equity, and the two companies began joint infrastructure development. Sojitz is also planning wastewater recycling in Caofeidian using basic technologies from Japan, and work is progressing towards the creation of an eco-city. Sojitz established the Environment & Infrastructure Unit as an internal organ in the Machinery Division on April 1, 2010 to undertake development of this type of environmentally-friendly industrial city and infrastructure businesses in conjunction with that development.

Caofeidian consists of the Caofeidian Industrial Zone, which is positioned on the southern coast of Tangshan City in Heibei Province, Caofeidian International Eco-City, Nanpu Economic Development Zone, and Tanghai County and has an area of approximately 1,943 square kilometers. The Caofeidian Industrial Zone, which encompasses 310 square kilometers, is located at the center of Caofeidian. Plans call for the development of key industries including the steel business, primarily by the Shougang Group, as well as the petrochemical and coal chemistry businesses using crude oil and natural gas extracted from nearby regions, high-tech industries, electric power, environment and energy related industries, and logistics centered on a 300,000 ton pier. Caofeidian International Eco-City, which is to be developed in parallel, has an area of 150 square kilometers, and plans call for development of a city with a population of 800,000 by 2020. 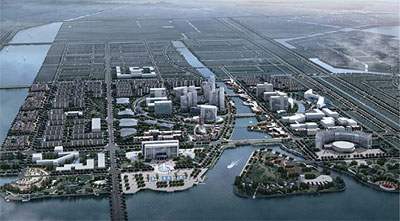 Rendering of the completed Caofeidian Eco-City