Sojitz Corporation has undertaken an equity participation in Cybernetix (CYBX) of Marseille, France. Sojitz and e-Energy Corporation (Head office: Minato-ku, Tokyo; Representative: Shuji Ishiguro), a subsidiary of Sojitz that sells nuclear fuel and nuclear equipment, will undertake a solution business, specifically in the field of the dismantling of nuclear reactors by remote controlled systems. Sojitz has acquired 7.1% of CYBX shares, and establishment of a joint venture company in Japan is also considered to create new business model. 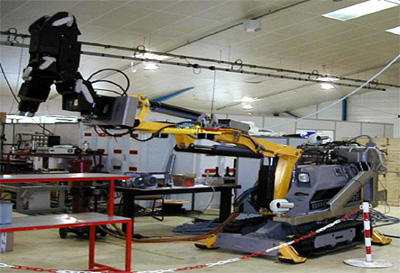 Remote-controlled small bulldozer mounted arm system (one of the examples)

There are about 400 nuclear power plants (NPPs) worldwide, which plants have been in operation since the 1960s. The standard operational period of such plants is about 40 to 60 years, and some are reaching the end of their lifecycle. The NPPs in Europe and Japan, after being shut down and following a waiting period of some years for safety, will have to be dismantled. The dismantling of these plants will require the development of special remote controlled systems for improvement of the related working environment. Such dismantling of old nuclear power plants will allow for the construction of new large-scale nuclear power plants with more energy efficient performance, which will contribute to CO2 reduction and to protection of the global environment as a whole. In Japan, where there are presently 55 NPPs in operation, the demand for dismantling will come into after 2010. The corresponding market will be 2.9 trillion yen during the coming 30 to 40 years. Since the year 1999, CYBX has gained experience through the dismantling of nuclear facilities, mainly in France.

Sojitz, an exclusive agent of French nuclear fuel-cycle company AREVA NC (Head office: Paris, France), has long been involved in business with all the Japanese utilities for the supply of nuclear fuel and associated services. The epoch-making participation in CYBX is a milestone that may also enhance the promotion of other CYBX activities in the Japanese market, such as oil & gas activities and other industrial activities (vision services etc.).