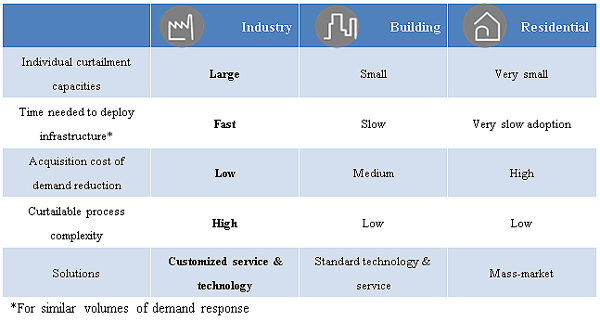 The project term is scheduled until the end of March 2015. The project will design iDR model and install system adapted to Japanese electric system and industrial characteristic by using European iDR model as a reference. The project will verify the commercial feasibility of iDR through actual Demand Response (demand reduction). We will deploy a demand response portfolio of 50 MW, equivalent to the residential consumption more than 200 000 inhabitants. Upon the result of the project, the project will make recommendation for regulatory change and operational procedures in terms of the Electricity System Reform.

Roles of each company

The project leverages the expertise and experience of each of the four companies.
Their respective roles are as follows:

Background of the project

The vulnerability of the large-scale and centralized energy system in Japan has become evident since the East Japan Earthquake, and in addition, the necessity of energy system to absorb the output fluctuation coming from the increase of renewable energies has risen. This has resulted in the need for energy management initiatives such as Demand Response, which can balance supply and demand, on top of current energy management systems in homes and in buildings.

Energy Pool, Schneider Electric, Sojitz, together with TEPCO will deploy this initiative to contribute to a better energy future for Japan.

* Nega-watt means that an utility purchases electricity saved by consumers as if the same amount were produced by a power plant.

Japan’s Ministry of Economy, Trade and Industry and NEPC are working together to promote a next-generation energy and social system demonstration project as part of the national effort to achieve significant reductions in energy and power consumption while making more effective use of renewable energy. These goals will be achieved through the development of smart communities ? distributed energy systems that manage energy generation and consumption on a local basis ? and the introduction of new services and flexible rate structures. The aim of this demonstration project is to set up a smart community, and in the effort to make this community a reality, a number of demonstration programs are now being implemented to tackle various challenges ? such as visualization of energy use, control of home appliances and water heating systems, and dynamic-pricing or point-based demand response.

Sojitz is developing solar generating operations and fossil fuel generating operations (Equity holding generating capacity 777 MW) in Japan and overseas.
After the East Japan Earthquake, the necessity to control electricity consumption on demand side has been increased. In addition to that, the market to be able to trade the curtailed electric capacity by End-user (Nega-watt) is assumed to be established until when the retail electricity sales is assumed to be liberalized in 2016. Sojitz aims at developing nega-watt business.

As a global specialist in energy management with operations in more than 100 countries, Schneider Electric offers integrated solutions across multiple market segments, including leadership positions in Utilities & Infrastructure, Industries & Machines Manufacturers, Non-residential Building, Data Centers & Networks and in Residential. Focused on making energy safe, reliable, efficient, productive and green, the company's 140,000 plus employees achieved sales of 30.8 billion US dollars (24 billion euros) in 2012, through an active commitment to help individuals and organizations make the most of their energy.

With over 1200 MW of demand response capacity under management, Energy Pool is the European leader in Demand Response. At critical times for the power network, the Company provides relief to the electric grid by aggregating and managing large end-users’ loads.
Energy Pool brings unprecedented industry knowledge, expertise and experience to offer the most reliable, adaptable and cost-effective smart demand side management programs.
From its headquarters and Network Operations Center in Savoie Technolac, France, Energy Pool provides 24/7 monitoring and control of its partners’ assets.