Sojitz, Furukawa, and DOWA Metals & Mining to Expand Copper and Molybdenum Production at Gibraltar Mine, Canada

Sojitz Corporation, Furukawa Co., Ltd. and DOWA Metals & Mining Co., Ltd., a subsidiary of DOWA Holdings Co., Ltd., will expand the Gibraltar copper and molybdenum mine that they own jointly with Taseko Mines Ltd., a Canadian mining firm, by 1.6 times.

The three Japanese partner companies established Cariboo Copper Corporation (owned 50%by Sojitz, 25% by Furukawa, and 25% by DOWA) in March 2010, and through Cariboo, they acquired a 25% interest in Taseko Mines’ Gibraltar copper and molybdenum mine.

In conjunction with economic development and infrastructure construction in emerging market countries such as China, global copper demand is expected to increase by 3% to 4% annually. Approximately 35% of the world’s copper concentrate (16 million tons in 2010) is produced in Chile, but since copper is a resource with a high degree of unevenness of distribution, production and environmental costs are expected to rise.

The copper concentrate produced at the mine contains few impurities and is highly competitive for supply to refineries in Japan in terms of quality, production costs, and transport. With the mine expansion, Furukawa and DOWA will secure even more stable supply of copper resources, while Sojitz will further expand copper mining business.

The Loan, Equity Investment and Loan Guarantee Schemes of the Japan Oil, Gas and Metals National Corporation (JOGMEC) will be used for the mind expansion project. 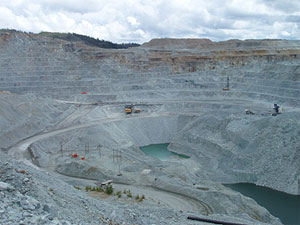 [The Gibraltar copper and molybdenum mine in Canada]

Overview of the Gibraltar Mine