Sojitz Corporation reached agreement with United Africa Group (Pty) Ltd. (UAG) (a Namibian company based in Windhoek) and Korea Midland Power Co., Ltd. (KOMIPO) (a Korean company based in Seoul) to cooperate in the implementation of Namibia’s first wind power project and signed a joint development agreement to this effect. This marks the first time that a Japanese firm will participate in an independent power project (IPP) in sub-Saharan Africa.

The wind power project, which will be constructed in Luderitz in southwest Namibia, will have a generating capacity of 44 MW. Total investment is expected to be approximately $150 million, which will be raised though project financing. A detailed wind assessment will be performed in the construction area and a long-term power supply agreement will be signed with the Namibia national power company in the first half of 2011. It is expected that operations will start in 2013. A second phase that will increase the generating capacity to 90 MW is also planned.

Namibia relies on South Africa and other neighboring countries for imports of relatively low-cost electricity for more than half of its domestic electric power demand. However, demand for electric power in the region is growing and electricity prices are expected to rise substantially in the future. As a result, Namibia has adopted a policy of increasing domestic power generation. Namibia is also working to introduce renewable energy sources with minimal environmental impact, and the Luderitz wind power project is positioned as a promising venture.

Namibia possesses abundant natural resources including uranium, diamonds, and natural gas and enjoys stable economic growth. In recent years, attention has turned to Namibia’s rare earth reserves, and business opportunities are expanding as a result of active development and investment from overseas.

UAG is involved in a wide range of business areas in Namibia, from development of resources such as uranium and natural gas to real estate and hotel operation. They entered the wind power business in 2007. Sojitz will make use of UAG’s know-how and networks to enter new business fields including electric power generation and infrastructure development.

KOMIPO, a wholly-owned subsidiary of Korea Electric Power Corporation, is involved in thermal, wind, tide, and other forms of power generation as well as maintenance and consulting businesses. They are active in electric power development in Africa. Sojitz formed a strategic alliance with KOMIPO for development of electric power business in Africa and is involved in other projects outside of Namibia as well.

Sojitz has positioned Africa as a priority region and is posting strategic personnel there to develop markets. Sojitz will continue to undertake large-scale projects such as IPPs and power plant construction in Africa in the future. 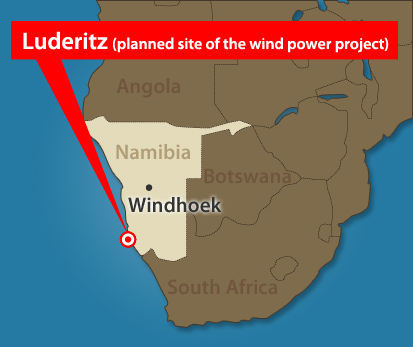