Sojitz Corporation and Nittetsu Mining Co., Ltd.  (head office: Chiyoda-ku, Tokyo; President: Rokuro Matsumoto) concluded an  agreement with the government of the Lao People's Democratic Republic for the  acquisition of exploration rights to copper deposits in the Moune District of  Laos. The Moune District, which has an area of approximately 226 square  kilometers, is located about 100 kilometers west of Vientiane, the capital. The two companies  will conduct exploration with the aim of developing copper mines. This is the  first time that Japanese companies have acquired exploration rights to copper  deposits in Laos. 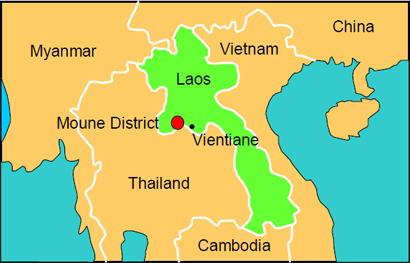 【Moune District and its Neighboring Countries】


Japan  imports approximately 1.3 million tons (on a copper content basis) of copper  ore annually and is the world's second largest importer of copper after China. South America currently accounts for 60% of imports,  making the stabilization of supply through the diversification of sources an  important issue. Consequently, Sojitz and Nittetsu Mining plan to obtain cooperation  from the Japanese government concerning capital aspects of the project and the  development of a suitable investment environment in Laos from the exploration and  development stages with the aim of securing a new copper source.

It is believed that the Laos has 6 million tons or more of copper ore, making  it a promising copper supplier in Asia. As  exploration proceeds, it is expected that confirmed reserves will increase even  further. In addition, Laos  is ideally situated geographically for supply to Asian markets where demand is  growing such as China and India, and it occupies an important position for  the supply of copper to Asia.

Copper is an indispensable  metal for infrastructure development, automobiles, durable consumer goods, and  many other products, and demand for copper is expected to grow, particularly in  emerging markets. It is projected that global annual demand will increase from  approximately 18 million tons today to 20 million tons or more in 2012, which  will make this project even more important.

Sojitz  plans to investigate investment and participation in copper mining in the  Pacific rim including Asia, North America, South America, and Australia in the  future with the goal of contributing to the stable supply of copper.