- Trial Project Aimed at Commercial Application Begins in the UAE -

Sojitz  Corporation has launched a full-scale project in the United Arab Emirates (UAE)  aimed at commercializing agricultural production based on an original  cultivation technology. The growing method being advanced in this undertaking  is focused on the laying of a specialized film-consistency sheet on the ground  surface, which supports cultivation of vegetables in the total absence of soil  and with only trace use of water. The goal is to popularize the new approach in  the Middle East, a region of the world sorely  lacking in water resources.

Working jointly with the Al  Ghurair Group (a leading financial conglomerate in the UAE) and Mebiol Inc.  (headquartered in Hiratsuka City, Kanagawa Prefecture; Yuichi Mori, President),  a biotechnology business venture financed directly by Waseda University of Japa,  Sojitz has been advancing trial cultivation of tomatoes through this technology  in Sharjah (one of the seven emirate states contained in the UAE) since this  January. Working on experimental facilities within the hot, dry and extremely  low rainfall UAE climate, the trial program has succeeded in growing superior  quality tomatoes with high sugar content. 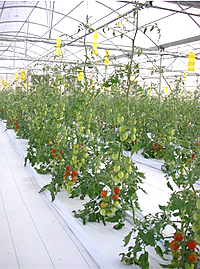 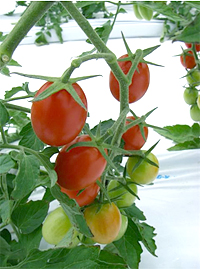 The  breakthrough plant growing system developed by Mebiol uses the special film to  separate the plants and nutrient solution in the cultivation process. The film  is created from gel instilled with water-retention capacity, while the  cultivation process advanced by having only the water and nutrients absorbed  from the nutrient solution supplied directly to the plant roots. The plants  then strive to absorb the water and nutrients present in the film, generating  growth of a massive number of fine hair-like roots that cling to the film  surface. To heighten absorption of the nutrient solution, furthermore, the  plants produce large amounts of sugar, amino acids and other substances,  leading to top-quality tomatoes with high sugar content.

Because the  traditional practice in the Middle East is to  pump up groundwater or desalinate seawater for use in cultivating crops,  lowering production costs has always been a key theme. Besides this, with crop  growing focused on the oasis regions where agricultural water can be obtained,  it has proved difficult to expand cultivatable land with conventional growing  methods. Armed with this new technology, however, it will be possible to  strictly control the amount of water in use, while also eliminating the need  for the type of elaborate equipment utilized in standard hydroponics. The  bottom line, therefore, is the key to easier and more effective agricultural  production in desert regions and other areas poor in water resources.

Sojitz plans to collaborate  with the Al Ghurair Group to initially pioneer demand for these high sugar  content tomatoes among the affluent classes in the UAE (a segment accounting  for about 20% of the population), upscale hotels, restaurants and other  promising targets, while studying the shift to a production business rooted in  the pursuit of economic viability. The vision for future development includes  business expansion to other countries in the Middle East and Africa  as well.