Sojitz Enters Into a Long-term Bio-ETBE Sales Contract with Braskem, the Largest Petrochemical Company in Brazil

Biofuel chain established to combine with its bioethanol business

Bio-ETBE, a material produced by mixing ethanol (43%) together with isobutylene (57%), is expected to be used as an additive for conventional fuels such as gasoline. Bio-ETBE has the least impact on the supply of foods such as grains, and offers great CO2 reduction benefits.

In Japan, the ‘introduction of biomass-derived fuels for transport use’ was decided as stipulated in the ‘Kyoto Protocol Target Achievement Plan’, which was approved in a cabinet meeting on April 28, 2005. Starting in 2010, the Japanese oil industry plans the full-fledged introduction of 840,000 kiloliters of bio-ETBE per year. In Europe too, the introduction of bio-ETBE is being promoted in a political sense, and approximately 4 million kiloliters of bio-ETBE is already being distributed annually. Sojitz will start handling bio-ETBE from 2009, and will try to sequentially expand the volume it handles, aiming at 150,000 kiloliters per annum for the Japanese and European markets in 2010.

It is expected that bio-ETBE material ethanol could be supplied to Braskem by ETH Bioenergia S.A, a bio-ethanol/sugar producer jointly established by Sojitz and the large-scale Brazilian conglomerate Odebrecht S.A., the parent company of Braskem. A competitive bio-fuel supply chain will be established by undertaking operations from the cultivation of the sugarcane used as an ingredient of bioethanol, to ethanol production, bio-ETBE production, and the import and sales of bio-ETBE.

In consideration of the pressing need to develop and use new environmentally-friendly resources and energy, Sojitz contributes to society by actively promoting its environment-related businesses related to bio-fuels, emissions trading, and the effective use of fossil fuels. 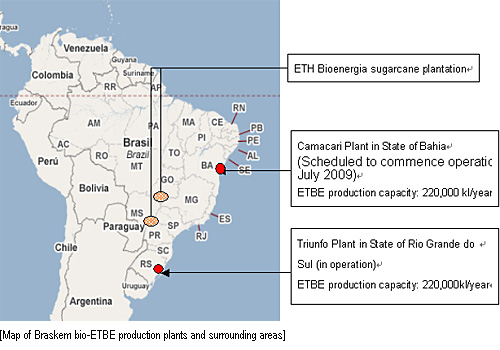