Sojitz has increased its resource in Western Australia

Sojitz expands its resource base of the integrated project from mining to pellet production, which targets Japan, Asia and Middle East market

Sojitz Corporation is pleased to announce that it has agreed to purchase a 30% stake in Exploration License (EL) which covers the eastern extension of the Southdown Magnetite deposit from Grange Resources Limited (Head office: Perth, Western Australia; hereafter abbreviated as GRL), through Sojitz Resources and Technology Pty Ltd, its 100% wholly owned subsidiary company. Sojitz is jointly developing the Southdown Magnetite Project with GRL.

Southdown Magnetite deposit is located about 415 km SE of Perth. With the inclusion of the above EL (which adds about 300m additional tons), the resource now comprises more than an estimated 800m tons. By acquiring its 30% interest in the EL, Sojitz has increased its overall chare of the resource by around 240m tons, the use of the EL enables the Southdown project to utilize more land and more resources, which enables the project to increase yearly production capacity and/or extend its project life.

Further, Sojitz is working with GRL to develop a vertically integrated approach to the project from operational mining, right through concentrate production, pellet production and market distribution. For example, the joint venture is currently studying the feasibility of constructing a high grade pellets in a third country such as Malaysia, from where pellets can be sold directly to steel makers.

Southdown Magnetite project can produce low impurity concentrate, and it is suitable to produce high grade pellets. In addition, because it is much closer to the growing markets such as Japan, Asia and Middle East, its transportation cost is much lower than the other pellet suppliers, thereby keeping the project’s output very competitive.

The Southdown Magnetite project is being developed steadily, with the obtaining of environmental approval for both mine and port expected soon. Based on the above, the commissioning is scheduled in 2011.

Including Brazilian iron ore, Sojitz handles the top-class volumes of various iron ore imports to Japan. By enlarging the resource base of Southdown Magnetite project, Sojitz can develop a competitive vertically integrated position in the value-chain from up stream to down stream. This will enable Sojitz to expand its business into Asia and the Middle East markets and also to contribute to the stable supply of quality iron ore pellet materials to Japan. 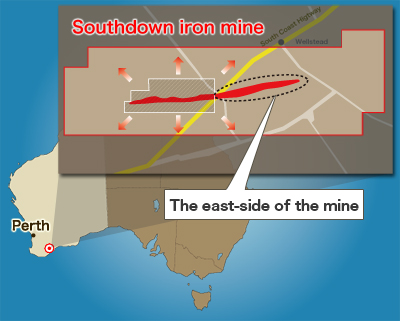 [Image of Mine Property]