Sojitz Corporation of America, the US subsidiary of Sojitz Corporation, together with rolling stock manufacturer Hyundai Rotem Company (Head office: Seoul, South Korea), a member of the Hyundai Motor group, has received a 19 billion yen order from the Massachusetts Bay Transportation Authority (Head office: Boston, U.S.A.; hereafter abbreviated as MBTA) for 75 units of new model multi-level passenger coaches. An option to purchase an additional 75 units is included in this contract, and there is a possibility that the Sojitz Group and Hyundai Rotem will receive a large-scale order for up to 150 units of passenger coaches.

MBTA, which operates the first subway system in the country and is the fifth largest public transit agencies in the US, currently operates suburban commuter rail lines, bus routes and ferry routes besides four subway lines.  With the current environmental issues, escalating gasoline prices and increasing demand for commuting in the suburbs of Boston, MBTA needs to increase its transportation capacity, and has therefore decided to go ahead with the large-scale procurement of new model multi-level coaches.

As the subject contract is funded by the US federal government, the ‘Buy American’ regulation will be applied; under which regulation, at least 60 percent of material and  component must be of US origin, and the coaches stock must undergo final assembly in the US.  The final assembly of the subject coaches will be performed at the Hyundai Rotem Weccacoe plant in Philadelphia, Pennsylvania, with expected delivery to MBTA commencing in early 2011.

The Sojitz Group has a track record of receiving orders for rolling stock in the US market since 1978, and has to date received orders for an accumulated total of over 1,000 units of rolling stock.  In 2006, the Sojitz Group and Hyundai Rotem received a series of orders from the Southeastern Pennsylvania Transportation Authority for 120 units of commuter EMU (Electric Multiple Unit) for suburban train system, and from a suburban railway company in Southern California for 161 units of multi-level coaches.  The subject MBTA order will be the third large-scale order to be received in the US.

Hyundai Rotem, approx. 60 percent of which is owned by the Hyundai Motor Company, is the only comprehensive rolling stock manufacturer in South Korea, and has succeeded in receiving large-scale orders in Asia, South America and the Middle East.  Commencing from the detailed design phase, the company has just begun production of prototype multi-level coaches for Southern California, for which contract was awarded with the support of the Sojitz Group.  The subject order was received from MBTA as a result of the highly-esteemed technical capabilities and price competitiveness of Hyundai Rotem.

The Sojitz Group will continue to focus on expanding sales of rolling stock across North America, making good use of its networks and accumulated achievements. 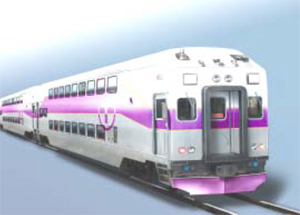