Sojitz to Invest in Food Wholesaler in Vietnam

Development of the Vietnamese market, with the use of sales channels and logistics functions

Sojitz Corporation will participate in the wholesale food business in Vietnam, following the acquisition of 25.01 percent of the shares issued by Huong Thuy Manufacture Service Trading Corporation (Head Office: Ho Chi Minh City, Vietnam; hereafter referred to as HTCorp.), one of the largest food wholesalers in Vietnam, from the company's founder and others.

Sojitz sees the booming Vietnamese food market as a huge business opportunity, and in June this year, prior to the investment in HTCorp, took a 20 percent stake in Vietnam's second largest milling company. In Vietnam, foreign investment regulations covering the distribution sector are planned to be abolished in and after 2009 as a result of the country's accession to the WTO, and full-scale entries by large foreign-affiliated retailers are expected after the law is revised. By undertaking upstream and mid-stream food and foodstuff businesses, Sojitz will strengthen its business foundation in the food market, where further growth is expected as a result of the free flow of foreign investment.

Approximately 60% of the total population of Vietnam is 30 years of age or younger, and dietary habits are becoming increasingly westernized. Demand for foodstuff is expanding rapidly, at a rate of over 10% annually, and the quantity of imported products is steadily increasing. Against such background, HTCorp. will expand its handling capacity through the utilization of an advanced Japanese-style logistics system and the ability to procure merchandise owned by Sojitz. The company will appropriately address the needs of large foreign-affiliated retailers, who are assumed to enter the market in future, and will challenge the current leader of the wholesale food business. 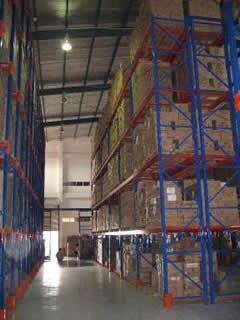