Sojitz Corporation has received an order from Dongkuk Steel Mill Co., Ltd. (Head office: Soul, South Korea), the third largest steel maker in South Korea, for a plate mill facility to be used to produce high tension steel for use in shipbuilding. The plate mill facility is scheduled to be delivered to an iron works in Dangjin, which iron works is planned to be constructed by Dongkuk Steel Mill. Operations will commence at the end of November 2009, and approximately 1.5 million tons of plate will be produced per year.

High tension steel, with superior weldability and high strength, is a high value-added steel plate used in shipbuilding, where it enables the manufacture of lightweight ships. In the shipbuilding industry, there is an increasing movement to use high tension steel plate for ship bottoms, due to various regulations such as those related to environmental issues. Dongkuk Steel Mill plans to address not only the brisk domestic demand for steel plates but also the demand from neighboring countries such as China.

The part of the subject order consisting of machinery and equipment for a plate mill facility, and an automation facility, has been jointly awarded to Siemens VAI Metals Technologies LTD (Head office: Dorset, UK; hereafter abbreviated as SVAI), a company that has excellent plate mill production techniques, and to Hyundai Heavy Industries Co., Ltd. (Head office: Ulsan, South Korea), the world's largest shipbuilder. SVAI will take responsibility for the entire engineering part of the project and the delivery of the main facility. Hyundai Heavy Industries will handle the deliveries of machinery that will be procured in South Korea.

Dongkuk Steel Mill, which has iron works in Pohang, Incheon and Pusan, produces mainly building materials and steel plate for general shipbuilding. The company currently produces about 2.47 million tons of plate, 1.16 million tons of section steel and 1.68 million tons of steel bars per year, and will begin its first production of high tension steel in order to respond to the recent growth in demand from the shipbuilding industry. Over 50% of all the plate to be produced at the iron works to be constructed in Dangjin is planned to be high tension steel.

To date, Sojitz has received orders valued at over 23 billion yen for iron and steel making facilities for Dongkuk Steel Mill. The company continues to work on arranging projects, and on making proposals for facilities that are suited to on-site needs. 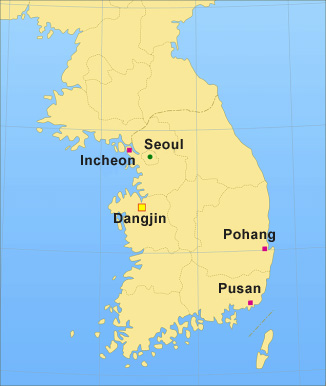