Sojitz to Double its Chemical Tank Facility Capacity in Vietnam

On November 20, Nichimen Chemical Tank Service Co., Ltd. (Head office: Vung Tau City, Ba Ria Vung Tau Province, Vietnam), a wholly-owned subsidiary of Sojitz Corporation that undertakes chemical product distribution and sales in Vietnam, held an inauguration ceremony for the completion of expansion construction for chemical tanks owned by the company. The said expansion will result in a total chemical tank capacity of 9,600 m3, and storage capacity will be doubled from the conventional level. Further, the name of the company changed to Sojitz Chemical Distribution Service Co., Ltd. (hereafter called SCDS) to expand sales in Vietnam

SCDS owns tankers and drum filling stations, and plans to expand its sales of chemical products to chemical manufacturers in Vietnam. The company posted sales of 1,000 million yen in 2005, and anticipates that sales for the year 2007 will be 1,200 million yen.

Up until now, SCDS had owned 1 unit of 1,500 m3 tank, 3 units of 1,000 m3 tanks and 4 distribution tankers, and has been making just-in-time deliveries that accommodate customer needs. In order to adapt to increased demand for chemicals in Vietnam, 1 unit of 3,000 m3 large tank and 3 units of 700 m3 tanks have been added, and the number of tankers has been increased from four to eight, through an investment of approximately 200 million yen. 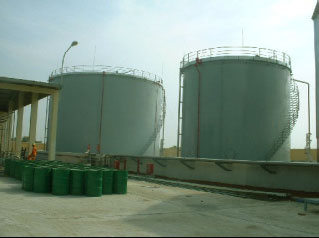 SCDS conducts the sale of methanol, which is in high demand for use as an ingredient in adhesives and acetic acid, and of butyl acetate that is used as a thinner solvent. The company boasts a 50% domestic share in Vietnam, in terms of methanol sales.

As far as the supply of methanol is concerned, efforts have been made with the use of the Sojitz Group networks such that import is conducted from PT. Kaltim Methanol Industri (KMI), which is a methanol production plant in Indonesia that is owned by Sojitz. The company aims at business expansion through the commencement of handling of new products such as monomer, which is an ingredient of resin paint, and various solvents.

There has been continuous economic growth in Vietnam, which will continue with its imminent accession to the WTO. The chemical market has been growing at an annual rate of approximately 15%. Japanese chemical manufacturers are expanding their businesses to Vietnam one after the other, and it is expected that the demand for chemicals will increase further. Sojitz positions value chain building in the field of chemical business as one of its growth strategies, and currently has chemical tank yards with a total capacity of 100,000 m3 across eight countries worldwide. The company will not only strengthen its efforts in Vietnam, which is one of its core business areas, but will also further enlarge and strengthen functions all over the world by aggressively injecting managerial resources.