Taking advantage of the knowledge of Chinese language study techniques that Applied Communication and Sojitz have cultivated, Amasia Corporation will start providing highly-effective comprehensive Chinese learning services that combine Internet-based online- and in-school lessons. By focusing on the provision of services to companies that make inroads in China, Amasia Corporation aims to achieve sales of 300 million yen in the first year and sales of 1,200 million yen in the third year.

‘Live China' enables students in their homes and offices to receive individual coaching in the Chinese language directly from instructors stationed in China, via the Internet, through a high-speed dedicated connection between Beijing and Japan. The service allows busy people, and those unable to find a Chinese language school nearby, to participate in a course whenever and wherever they are able. Since it started in 2003, the ‘Live-China' service has been used by a total of 3,000 students as Chinese lessons that can help one to learn not only the language itself, but also real live Chinese culture. 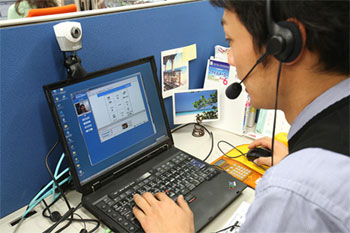