Sojitz Corporation of America, together with Mitsubishi Electric, Receives Large-scale US Order for Rail Cars

Sojitz Corporation of America, the US subsidiary of Sojitz Corporation, and Mitsubishi Electric Corporation have received an order from the world?fs largest railway equipment manufacturer, Bombardier Transportation (headquartered in Montreal), for a propulsion control unit for suburban commuter rail cars for the New York State Department of Transportation. The order amount will be approximately 8 billion yen.

The suburban commuter rail car propulsion control units, for which the subject order has been granted to the Sojitz and Mitsubishi Electric Groups, consists of a set comprising a control device (inverter) that is the heart of a train, a motor and a drive unit. A total of 194 rail cars will be delivered in 2006; 158 rail cars for the Long Island Rail Road and 36 rail cars for the Metro-North Railroad.

The propulsion control unit to be delivered by the Sojitz and Mitsubishi Electric Groups is the most-reliable of all the rail car inverters that have ever been adopted in the US. Although Bombardier manufactures similar systems within its Group, they have continuously adopted the Mitsubishi Electric product.

New York State plans to spend US$38.5 billion on transportation infrastructure for the five years from 2005, US$21.1 billion of which will be allocated to the development and expansion of railroads and bridges managed by the New York State Department of Transportation. The subject order for rail cars to be used by Long Island Rail Road and Metro-North Railroad is part of their improvements in service quality, and is intended mainly to replace the old-fashioned commuter rail cars operated by both companies with cutting-edge cars. Further, the adoption of the state-of-the-art inverter technology will significantly reduce power consumption and maintenance costs, the great benefit of which will be enjoyed by the railway companies.

Sojitz Corporation of America and Mitsubishi Electric have been conducting joint operations in the US market since 1998, and plan to focus their efforts not only to market equipment for rail cars as before, but also to expand sales of a greater range of railway systems. 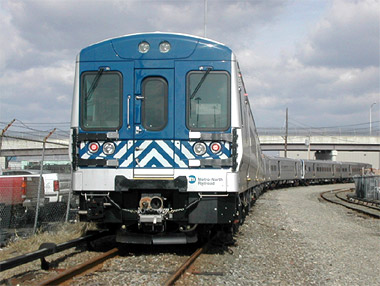 Metro-Norm Rail Cars (M-7) with On-board Inverter to be supplied by Sojitz and Mitsubishi Electric.