HomeArticleCamper Vans: The Road to Creative Work and Recreation

Camper Vans: The Road to Creative Work and Recreation 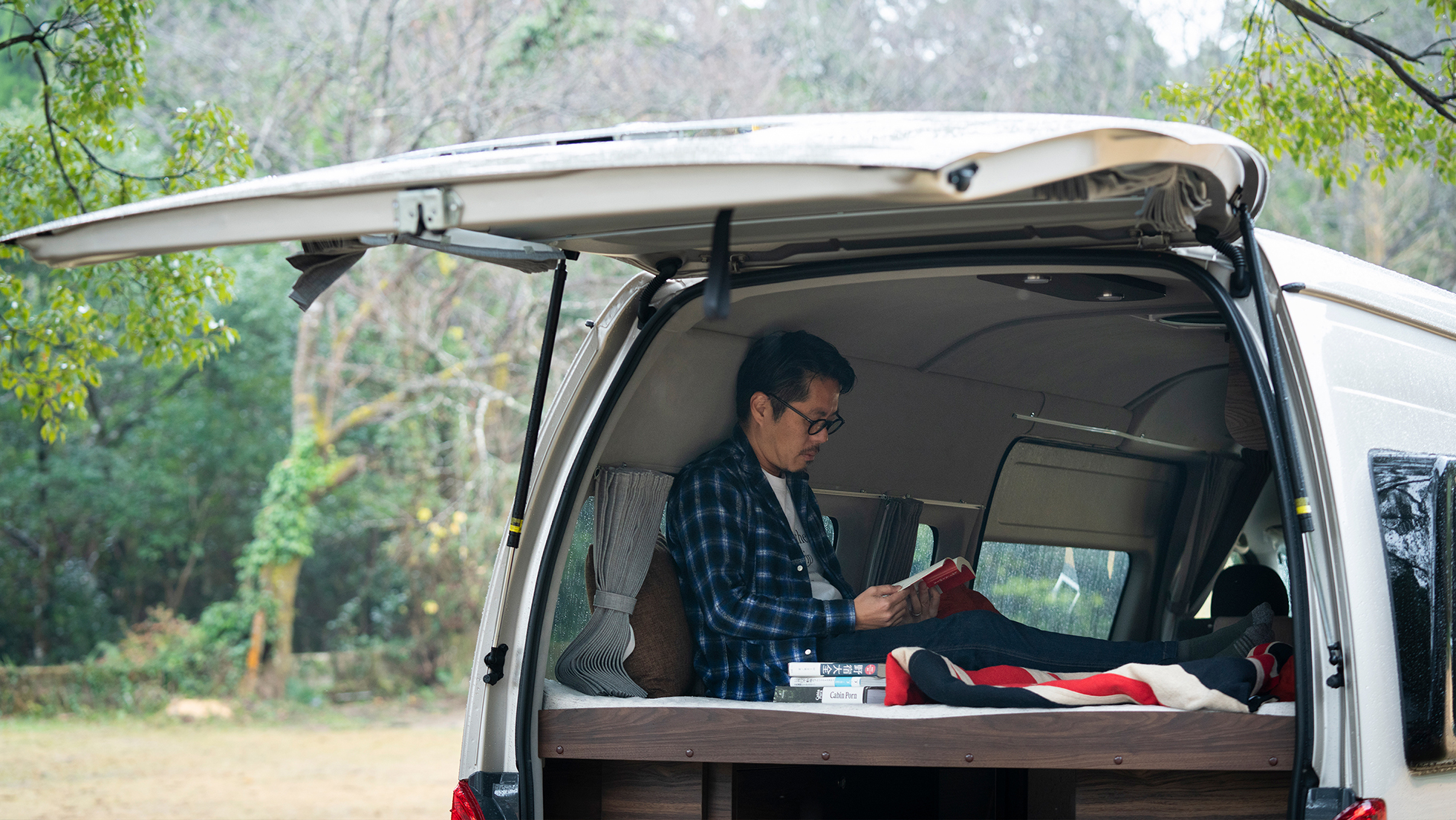 Our way of life has drastically changed over the last several years. People are spending less time in offices, and an increasing number are turning to outdoor recreational activities. In this new age, camper vans are entering the spotlight. Not only do camper vans let you turn any location into your campsite, but these vehicles also offer a completely private work space and can even be used as evacuation sites in the event of a disaster. Camper vans embody a new form of mobility. In this article, we introduce the van lifestyle in an interview with Shuichiro Sakaguchi, a producer who travels between the urban and rural worlds of Tokyo and Kagoshima.

Large camper vans frequently appear in Hollywood films and throughout American literature, and there are surely many who have been inspired by scenes of driving a large-bodied van down the highway or camping in the wilderness.

While camper vans are iconic in American culture, Japan has seen rising interest in campers over the last several years. Camper vehicle sales have rapidly increased driven by the wave of remote work, boom in outdoor activities, and desire for a second home to escape close contact with people during the Covid-19 pandemic. 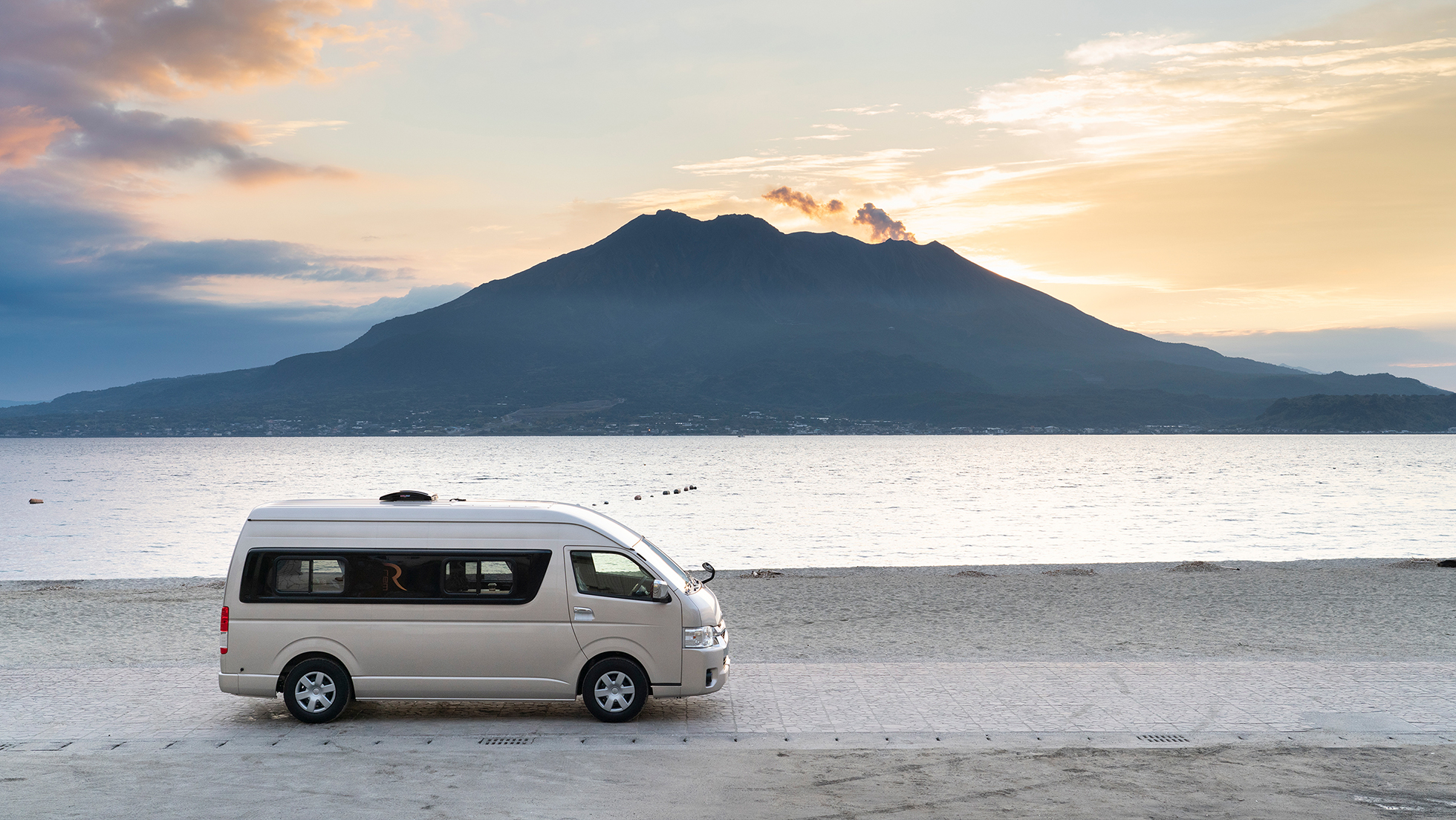 While there are many original camper van models sold across Japan by different manufacturers, the Camper Kagoshima brand boasts a great deal of popularity for its campers made for Japan’s roads with specialized interiors and functions. Camper Kagoshima vans are driven not only in Kagoshima and Kyushu where the brand is based, but owned by drivers as far off as Hokkaido.

There are 10 different types of camper vans sold under the Camper Kagoshima brand. One popular model is the “rem BV” which is well-equipped for short trips and comfortably spacious enough to accommodate a family of four. 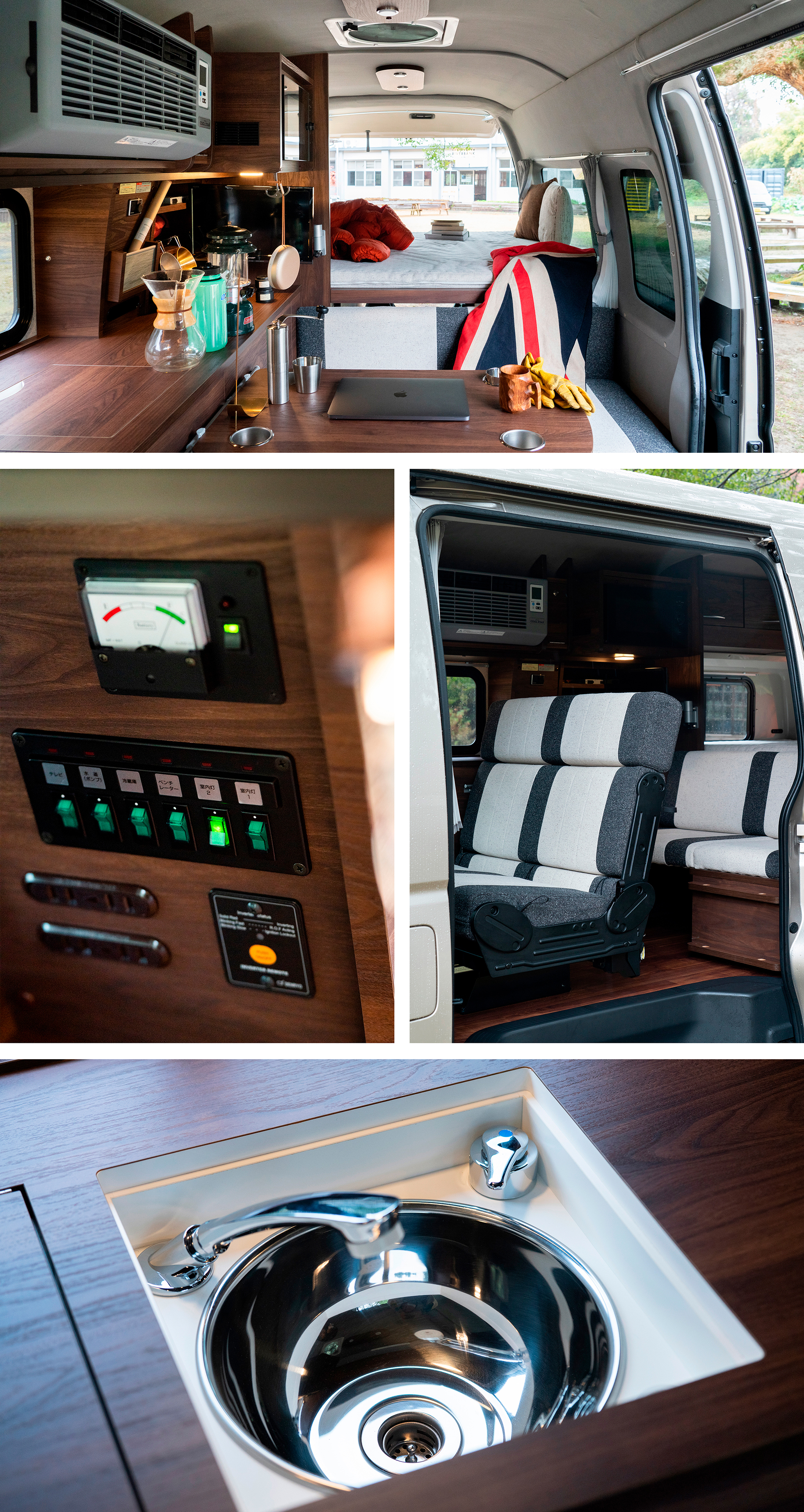 The backseat of the camper is configured so that passengers can sit facing each other across a table but can transform to a fully flat setup in just three minutes. The camper comes equipped with air conditioning, TV, and sink. In addition, there are solar panels on the rooftop, and the van has multiple AC power supplies installed. The camper is powered by a sub-battery as part of a system independent from the engine battery, so there is no need to worry about the van’s engine battery running out. 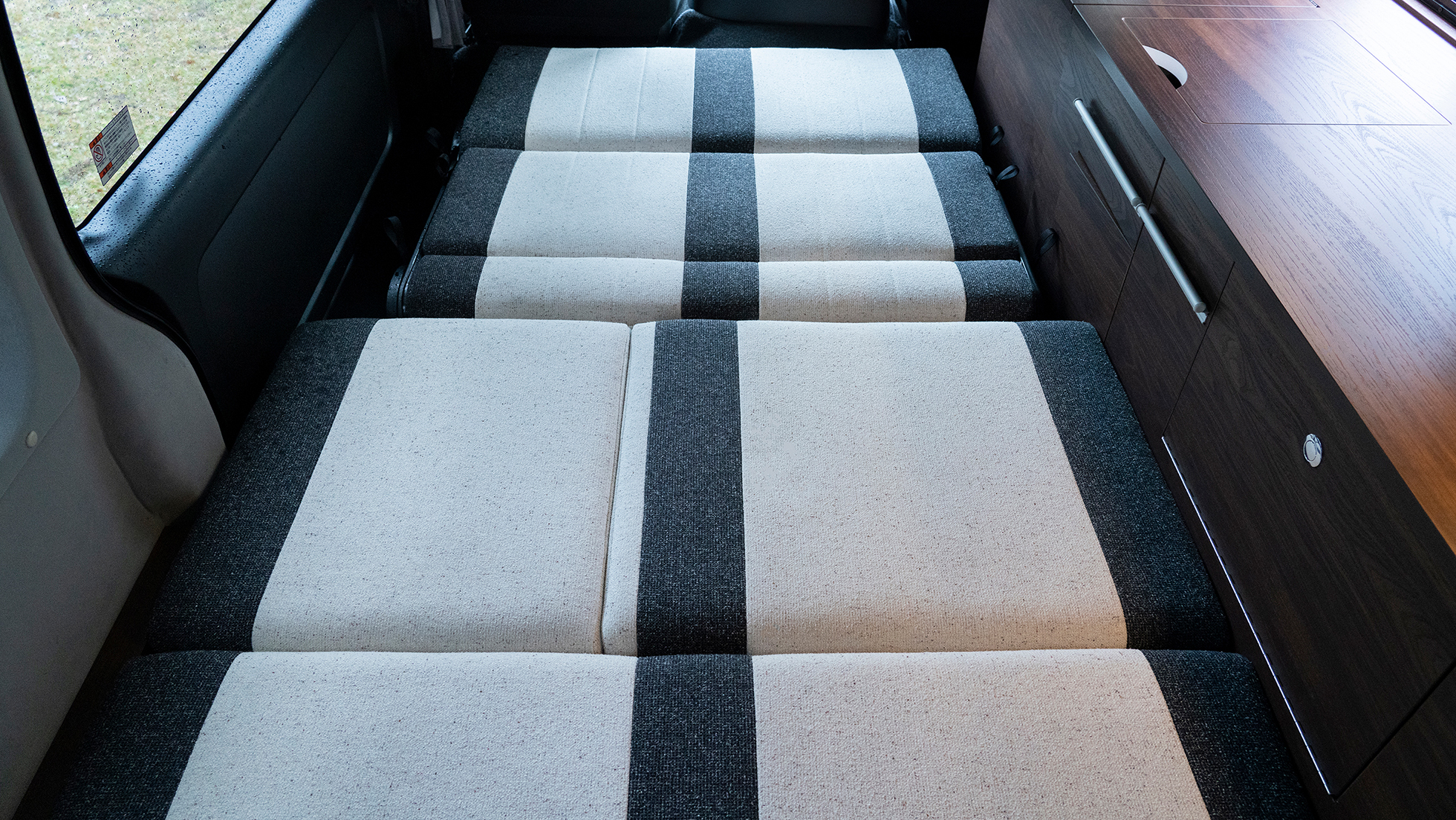 The luggage compartment is covered with a mat with room for two adults to easily lie down. One attractive feature is that users can customize the van’s interior by selecting from multiple types of wood paneling, the upholstery of the seats, and the interior layout in terms of the placement and use of furniture.

So how do you use a camper outfitted with all these amenities and features? We follow our guest Shuichiro Sakaguchi to get a glimpse into his way of work as a digital nomad. 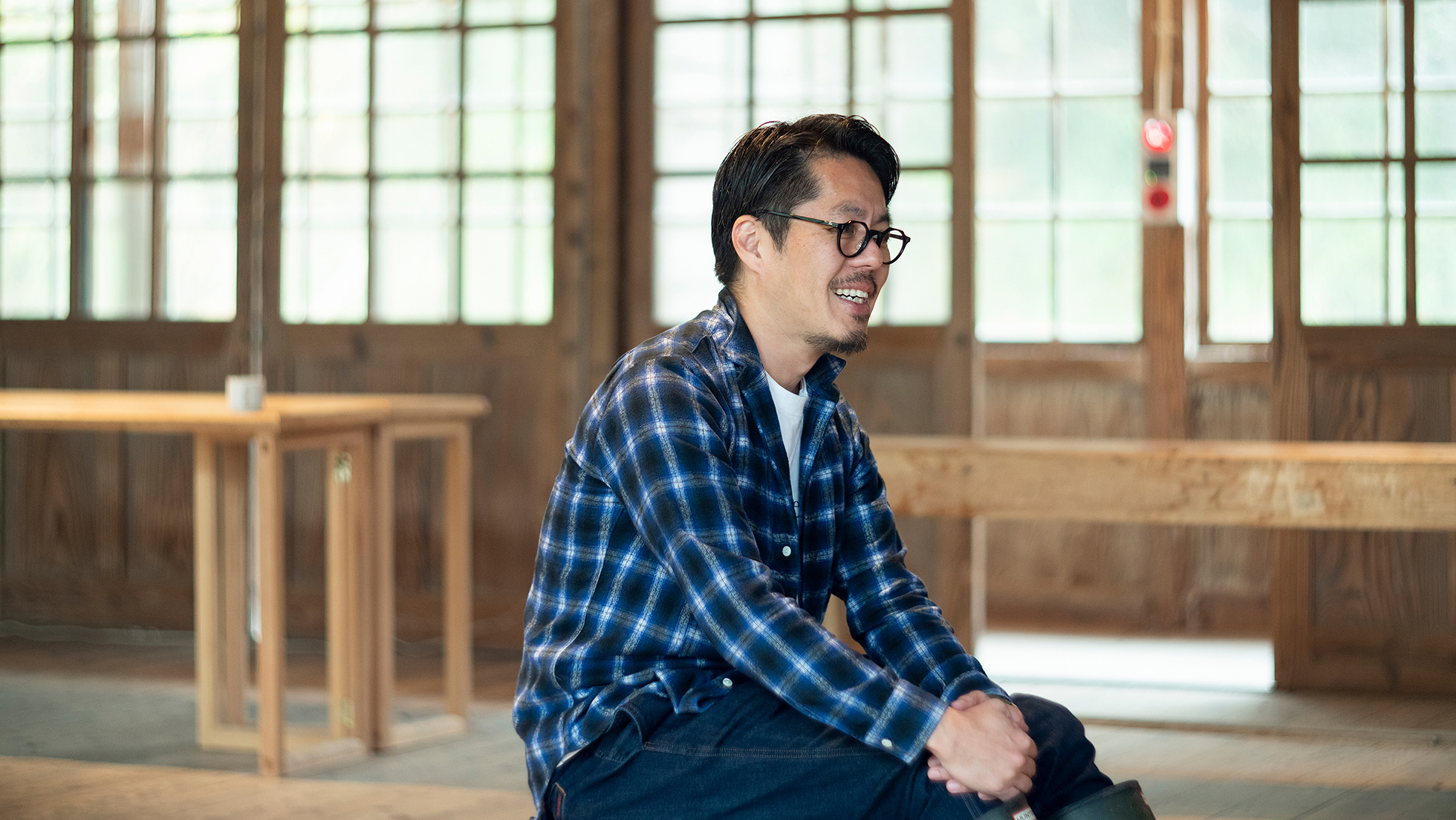 Sakaguchi has many titles including musician, producer, and contents planning director. If asked to select one, he identifies as a professional designer of environments. Sakaguchi created Unit, a live music club in Tokyo’s Daikanyama, and he also hosts a music festival in Kagoshima called Good Neighbors Jamboree. Additionally, Sakaguchi works on projects in both the public and private sectors to create communal environments. Sakaguchi currently spends his days traveling between Tokyo and Kagoshima.

“While people often tell me I have two work bases, it’s most accurate to say that my life revolves around three separate bases—the big city of Tokyo, the core city of Kagoshima, and the Riverbank School in the Woods, which is located one hour from Kagoshima by car.” 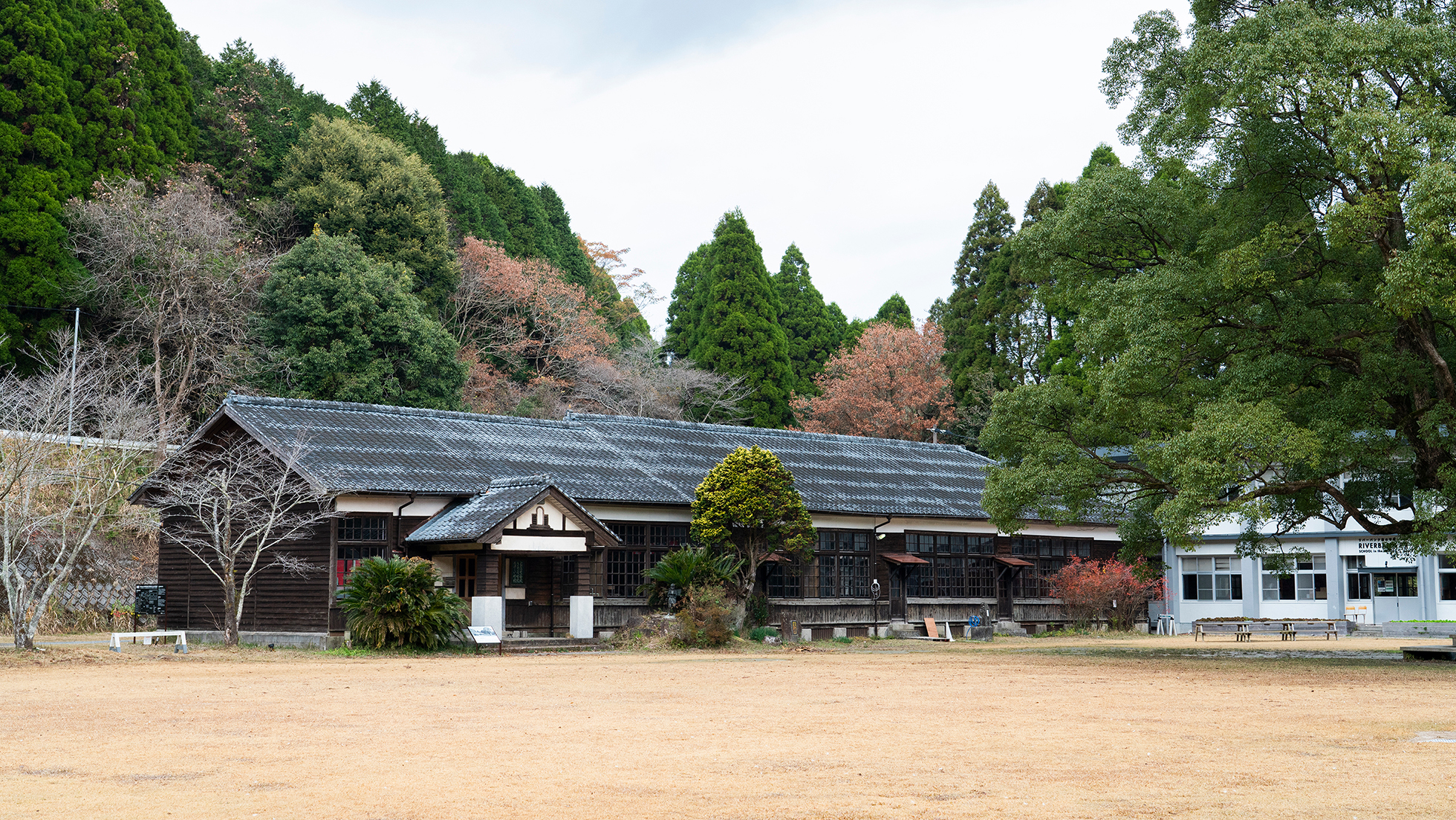 “There are currently close to 500 schools nationwide that close down every year. These closures create large abandoned “homes.” When schools close, people begin to leave the villages and the population of the area progressively declines. I was born and raised in Kagoshima, so hosting Good Neighbors Jamboree in my hometown is my way of giving back to the community and also stems from my desire to draw people back to this area.”

Sakaguchi’s efforts are beginning to bear fruit as the area’s population has grown by 25 people over the last several years. With an original population count of 1200 people and depopulation in multiple villages, a 2% overall increase has had a major impact. 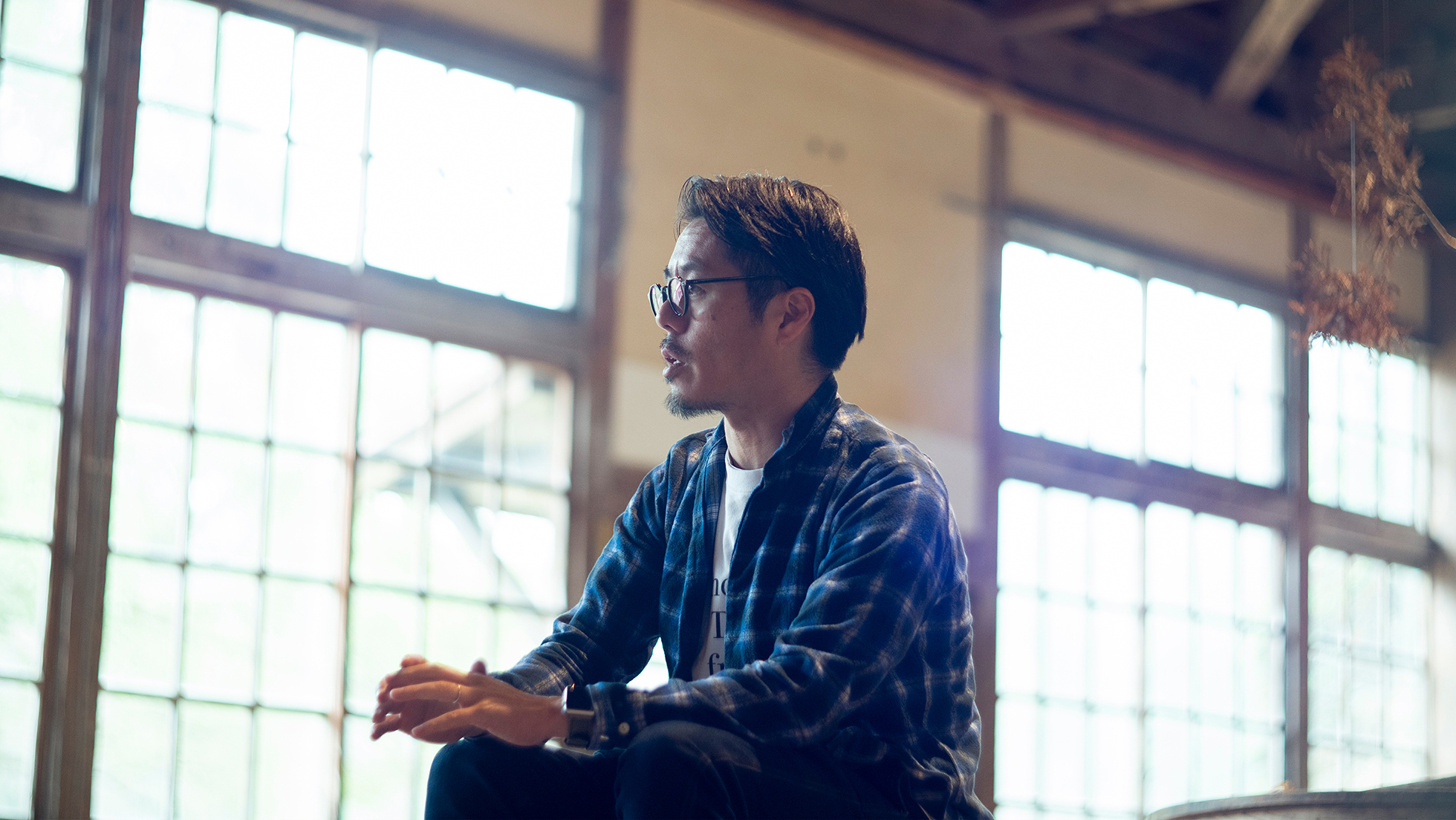 At the same time, Sakaguchi explained that revitalization of the region is not the topic at hand, but rather individual initiative.

“If we can all become more active and enjoy the environment, I think people will naturally gather. As a result, the region will be revitalized with new energy. If children gather in the area, it will surely please the older grandfather and grandmother figures in the community. I’d be happy simply bringing this type of happiness to older members of the community.” 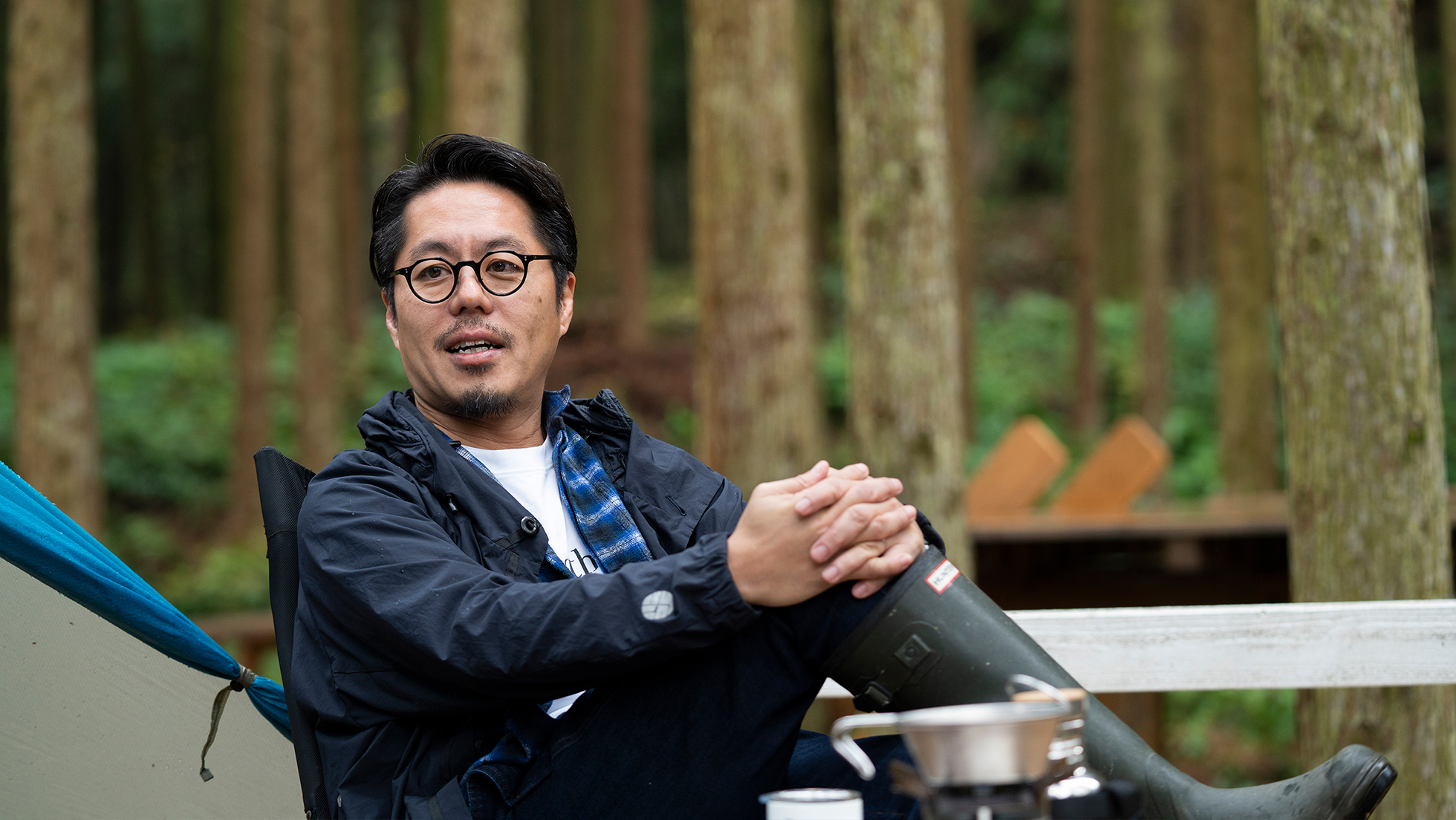 Sakaguchi gathers information from the frontlines in Tokyo, digests this information in his Kagoshima office, and then solidifies these ideas into concrete plans surrounded by nature at the Riverbank School in the Woods. These rich environments contribute to Sakaguchi’s revolutionary creative work.

“For better or worse, we can hold meetings anywhere now. Before the Covid-19 pandemic, I split my time between Tokyo and Kagoshima. However, now I am able to spend most of my time in Kagoshima.”

Nevertheless, Sakaguchi still travels to Tokyo several times a month, tirelessly moving between his Kagoshima office and the Riverbank School in the Woods on a regular basis. For a busy nomadic worker like Sakaguchi, a camper van is the optimal tool for both work and recreation. 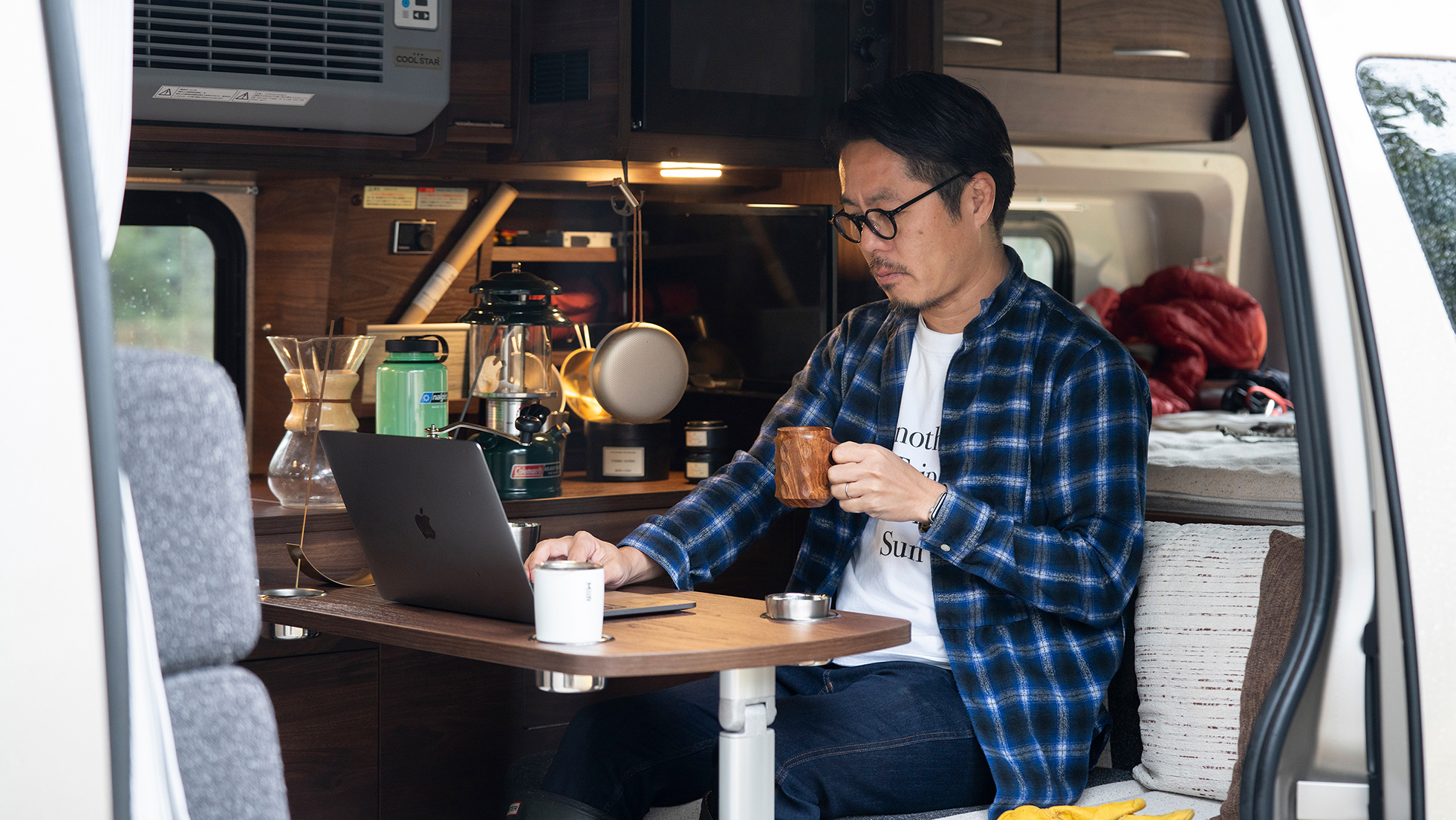 The flexibility to work anywhere is one of the positive changes brought about by the pandemic. In the past, a meeting naturally referred to an in-person event. Now that we have been freed from these constraints, we can really work from any location whether it’s in the city or a forest.

“After this whole experience, I feel as if my camper van works as a sufficient office,” Sakaguchi laughed. “If you have a table and chair, you can work as you normally do. There’s a power source. Not only that, you have unlimited choices when it comes to the location you’ll work from.” 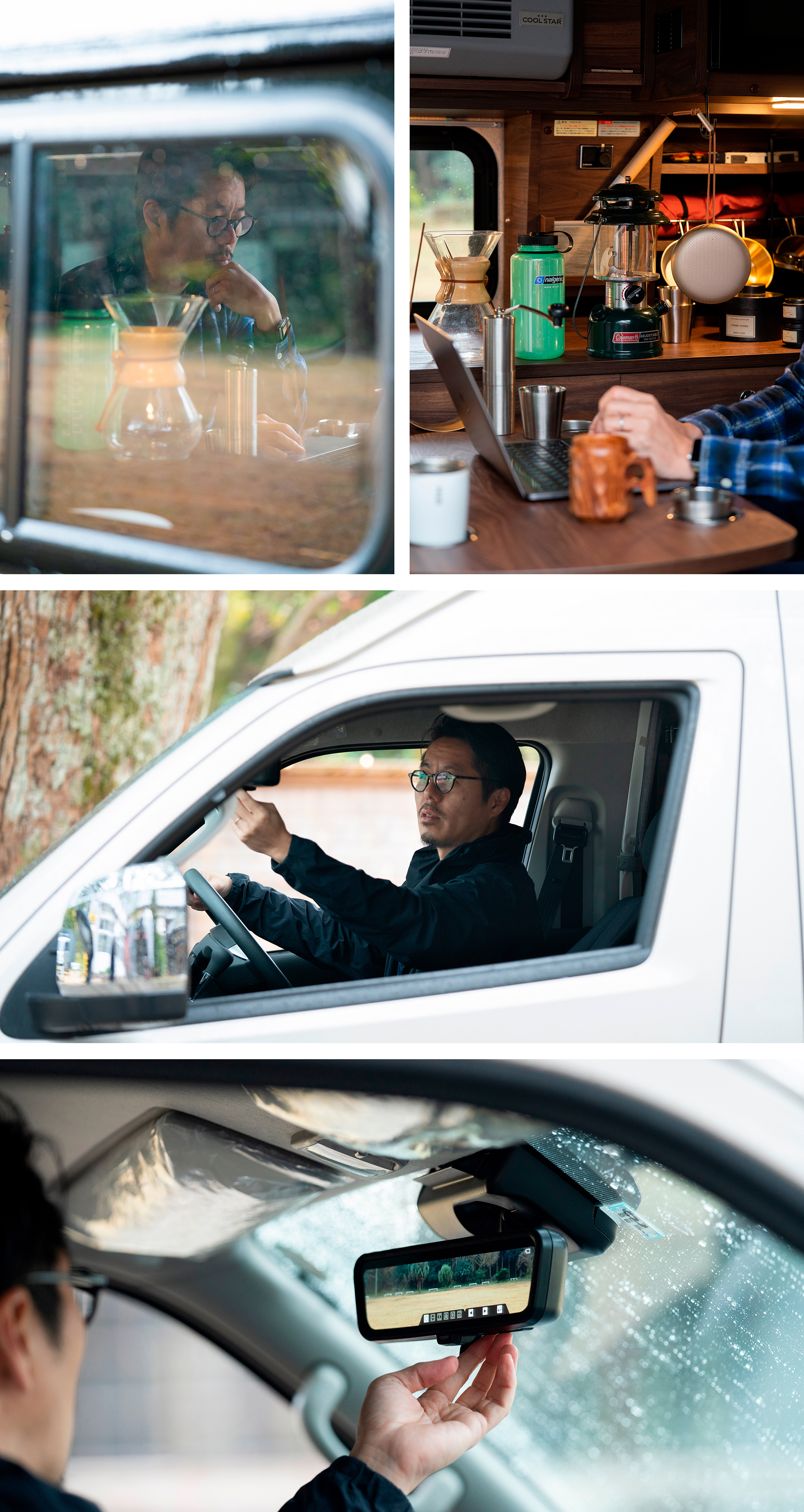 Camper vans are generally considered to be similar to motorhomes in terms of offering the comforts of a home on wheels. As Sakaguchi explained, there are also an increasing number of people who are using campers a second office. Today, you can do work from any location as long as you secure a desk and a chair.

“If you just sit in your office, you won’t come up with any interesting proposals,” Sakaguchi added. Apparently, he does not have a personal desk at his Tokyo or Kagoshima offices.

“I tell my team to spend as little time as possible in the office. If you are simply looking at your PC screen display all day, you won’t come up with any new ideas. You really have to make an effort to go out, interact with people, and experience a change of scenery to find inspiration for new ideas. In that sense, camper vans provide an excellent opportunity to place yourself in new environments.” 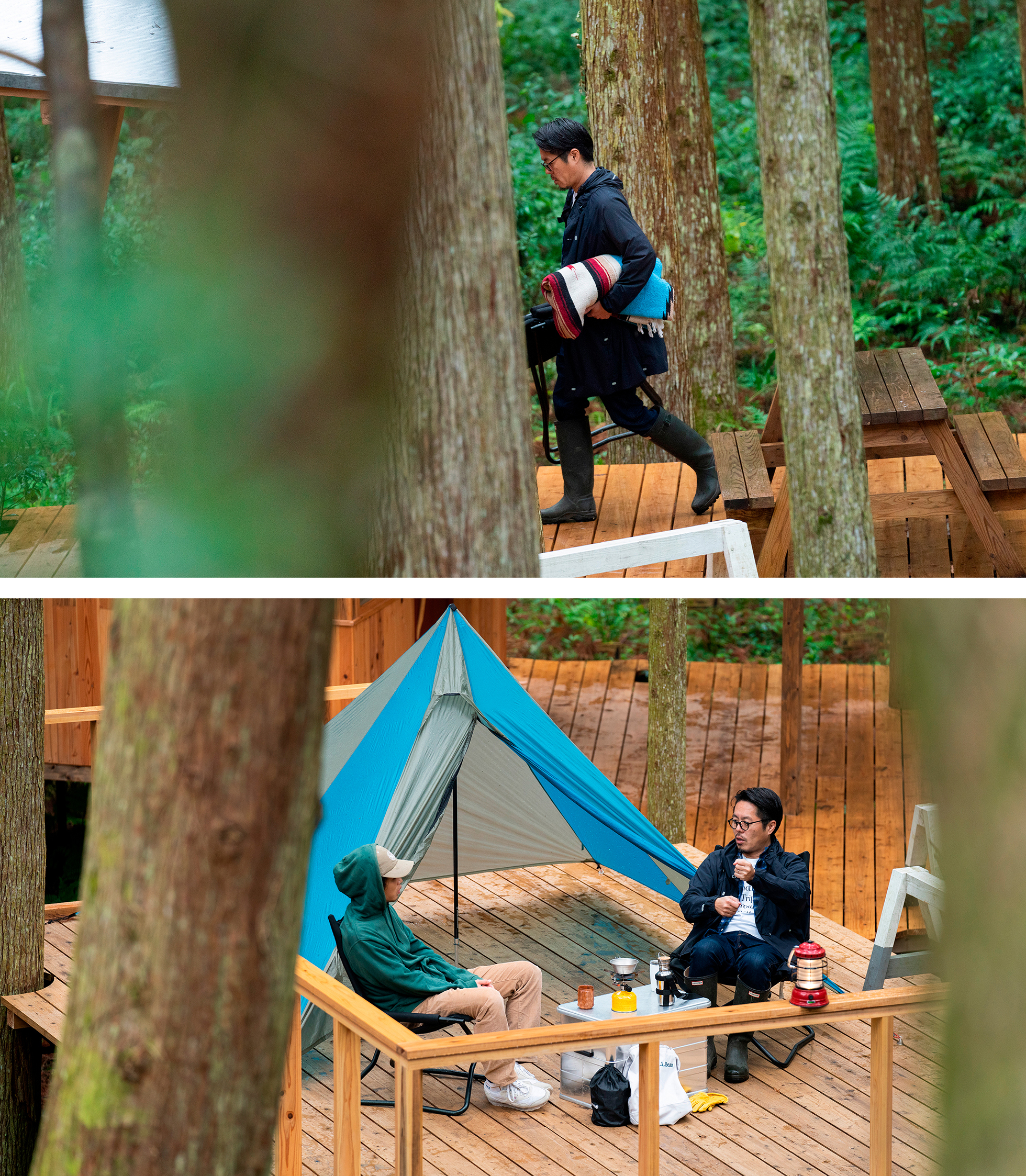 “The real highlight of any camping trip is the time spent chatting around the campfire. It can be a hassle to put up a tent. If you have a camper van, you don’t have to set up a place to sleep, so you save time and effort. Plus, your plans don’t have to be impacted by the weather.”

“In Kagoshima, there’s a place called Fukiagehama, which locals call one of Japan’s three great sand dunes. It’s completely deserted like a private beach. If you camp overnight, when you wake up in the morning you can see an endless expanse of ocean from the window. It’s really a luxurious experience. When I have online meetings at that location, people often jealously ask me where I am.” Sakaguchi laughed.

With a camper van, you can choose to make your stay in any location. Whether it’s deep within a forest, along a beautiful mountain stream, or by a serene lake, enjoy a star-filled sky just for you. The camper van’s limitless possibilities make it the ultimate vehicle for both work and play. 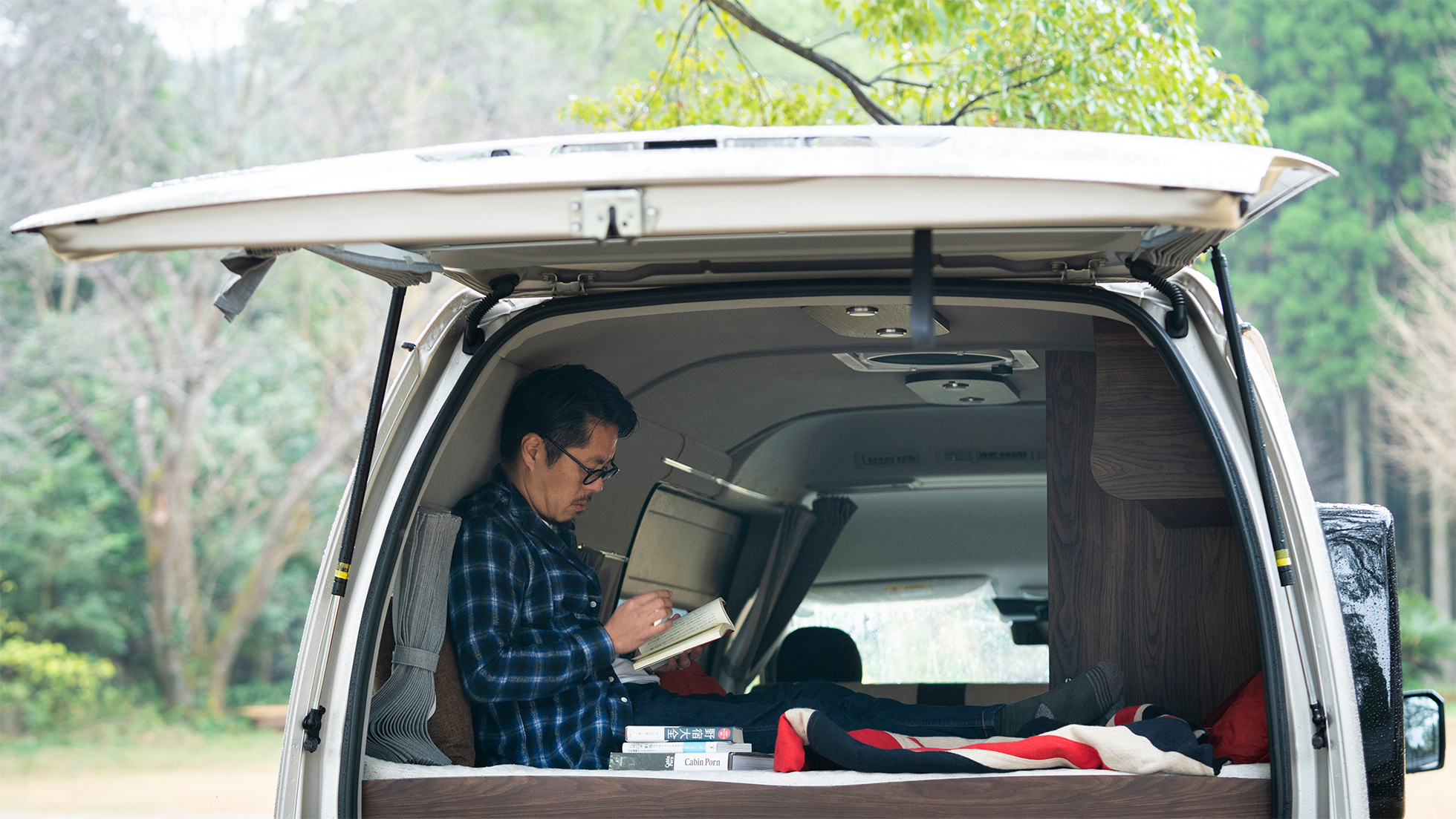 K Access Corporation is engaged in the manufacture and sale of campers, and the company’s Camper Kagoshima brand is a widely recognized name in the industry. Sojitz formed a capital and business tie-up with K Access in February 2021, marking Sojitz’s foray into the camper van market.

K Access Corporation is engaged in the manufacture and sale of campers, and the company’s Camper Kagoshima brand is a widely recognized name in the industry. K Access camper models not only include luxurious interior designs, but can be charged while the vehicle is running. These revolutionary campers are characterized by new value and high functionality, including a new power system pioneered by K Access that was developed and installed to ensure electric appliances can be used for long periods of time even while the vehicle is parked. Sojitz formed a capital and business tie-up with K Access in February 2021, marking Sojitz’s foray into the camper van market. 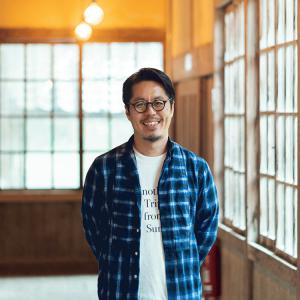