CGG group, established in 2010, currently has approximately 150,000 ha of agricultural land, and collects 2 million tons of grains annually. The CGG group and Sojitz will invest in the port terminal at Itaqui Port in northern Brazil, where the group owns usage interests, as well as inland silos and acquisition and development of agricultural land. Sojitz and CGG group aim to expand agricultural land ownership to 200,000 ha and grain volume handled by the CGG group to 6 million tons annually starting in 2020. In the past, grain exports from Brazil came mainly from ports in the south, and the lack of distribution infrastructure development caused chronic long-term delays of vessel departures during the peak export period. At the Itaqui Port which is currently under-construction, Sojitz expects to shorten ship loading times. Elimination of distribution bottlenecks and the shorter route to Asia will enhance competitiveness. 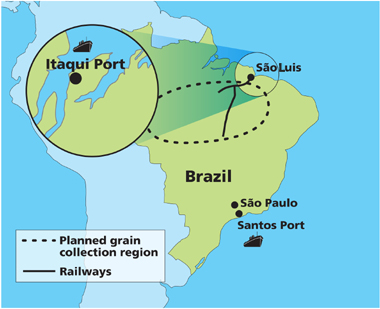 Through these investments, Sojitz will develop the agricultural production, grain collection, and terminal businesses, prioritize purchases of Brazilian grains (soybeans, corn, wheat, and other grains) collected by the CGG group, and sell those grains in Japan and other Asian markets as well as in China, which imports 70% of the world's soybean trading volume. In the agriculture segment, Sojitz will conduct soil improvement of non-arable land in Cerrado on the north east of Brazil and develop new farmland to contribute to increased food production on a global basis. 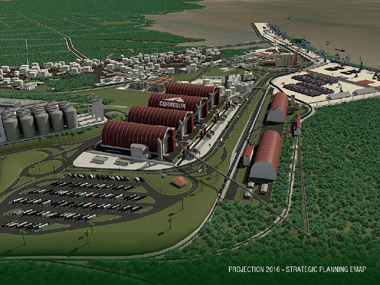 In addition to grain trading for sale in Japan and other Asian markets, Sojitz is involved in a wide range of grain businesses including grain sales by Interflour Vietnam Ltd., which owns the Cai Mep Agricultural Port, the largest special-purpose grain port in ASEAN, and Kyodo Sojitz Feed Company Ltd., which manufactures and sells compound feed.

By linking its business in Asia and South America, Sojitz is reinforcing its agricultural and grain value chain, contributing to the stabilization of food resource acquisition and supply in Japan and Asia. Sojitz has set a target of increasing grain trading volume to 10 million tons by 2020.