Sojitz Corporation received an order for a thermal power plant construction project jointly with Korea’s Daelim Industrial Co., Ltd. from Vietnam Electricity (EVN). The project has an order amount of approximately 28 billion yen. The O Mon No. 1 Thermal Power Plant Unit 2, which EVN plans for Can Tho City, will have a generating capacity of 300 MW and is expected to be completed and start operation in 2015.

The consortium between Sojitz and Daelim Industrial concluded an EPC (engineering, procurement, and construction) contract with EVN. Major equipment such as steam turbines and related equipment will be procured from Mitsubishi Heavy Industry. Sojitz will be responsible for supply of the Mitsubishi Heavy Industry steam turbines and related equipment and commercial negotiations, while Daelim Industry will handle supply of other equipment and engineering such as construction. The project is financed by yen loans.

Vietnam is currently enjoying rapid economic growth, and the demand for electric power, mainly from the industry and construction segments, is increasing by about 15% annually and is exceeding supplies. Approximately 20,000 MW of new power was developed through 2010 in accordance with the Vietnamese government’s national power development plan, but EVN is implementing new power development and power plant construction projects to meet future increases in demand. The O Mon No. 1 Thermal Power Plant Unit 2 project and other national power development projects will contribute to electric power supply in Vietnam.

Sojitz has extensive experience in Vietnam improving hydroelectric power plants, delivering power generation facilities, and obtaining orders for transformer facilities including investment in Phy My 3, an IPP project. Sojitz will continue to take advantage of its strengths and focus its efforts on projects that contribute to the development of Vietnam’s infrastructure in the future. 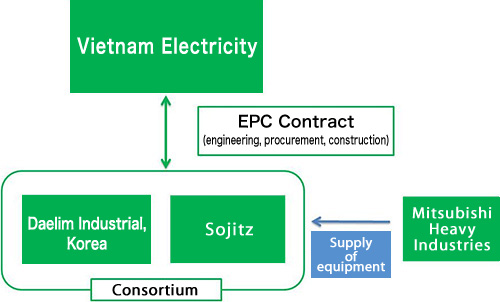