Sojitz Corporation made an agreement to acquire a 10% stake in Inner Mongolia Zhongmeng Coal Co., Ltd., a wholly-owned subsidiary of China’s Inner Mongolia Erdos Group, which engages in the resource business in Mongolia. The amount of Sojitz’s investment (for acquisition of a 10% stake and subscription to a capital increase) will be 30 million RMB (approximately 375 million yen).

The Erdos Group, the world’s largest producer and seller of cashmere products, also handles ferroalloy, electric power, coal, and coal chemicals, primarily in Inner Mongolia, and is one of the region’s largest companies. Zhongmeng Coal is active in cross-border trade of Mongolian coal to China and possesses its own border-crossing logistics and trade facilities (coal stock-yard, coal transportation vehicles and coal washing plant) at the border area between China and Mongolia (at two major crossing gate areas).

Sojitz has been active in the sale of Mongolian coal to China via Zhongmeng Coal since 2010 and now intends to expand its coal sales in China market and develop further markets such as Japan, leveraged by Zhongmeng Coal’s border-crossing logistics and trade facilities. Sojitz is also planning to develop Mongolian coal resources in partnership with Zhongmeng Coal and Erdos with the aim of establishing an original Mongolian coal supply chain covering upstream (resources), midstream (logistics and processing), and downstream (marketing and sales). 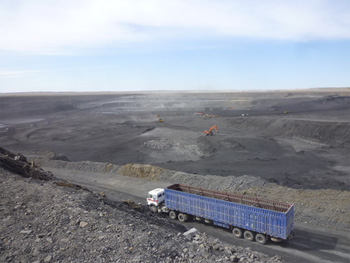 [A truck owned by Zhongmeng Coal]

Mongolia has abundant coal reserves over 150 billion tons (the world’s third largest) and can produce cost competitive coking coal by large-scale open-cut mining. It is expected that the export volume of metallurgical coal from Mongolia will steadily increase and will supply 10% of the world total trade volume by taking advantage of its geographical adjacency to Japan, China and South Korea, which are the world largest users.
In 2011, Mongolia’s total coal export volume was approximately 23 million tons. The export volume from Mongolia is expected to double and reach over 50 million tons per year by 2020 in conjunction with future infrastructure development, especially railways.

[Map of Coal Mines in Mongolia]