Sojitz Corporation has reached agreement with Kobe Steel, Ltd. (Kobelco) on joint development and implementation of the Southdown Magnetite Project (“Southdown”) in Australia. Kobelco acquires 33% shares of Sojitz Resources & Technology Pty Ltd (SRT), a wholly-owned Sojitz subsidiary that holds a 30% interest of the Southdown, a new iron ore mine. Following the share transfer, Sojitz and Kobelco will indirectly own 20.1% and 9.9% of Southdown project interest respectively through SRT.

The Southdown is developed with Grange Resources Limited as an unincorporated joint venture partner, 70% interest holder of the Southdown. With the participation of Kobelco, an iron ore user, in the project, the business foundations for development of the Southdown to produce magnetite pellet feed have been solidified. The Southdown mine is located about 90 km northeast of Albany in Australia’s southeast. Annual production of 10 million tons of high-grade magnetite pellet feed with an iron content of about 69% is planned, with shipments to start in 2015. The exploration financing program of the Japan Oil, Gas and Metals National Corporation (JOGMEC) is being used to support the project.

The mine is located in a geographically advantageous location, which will help keep costs low, and operating costs are expected to be at competitive levels. It is still expected that a pellet plant will be constructed and operated in Malaysia to process the pellet feed materials of the Southdown, but initially priority will be placed on mine development in Australia. Sojitz projects that total development cost of the mining project in Australia including related infrastructure development will be approximately 250 billion yen. 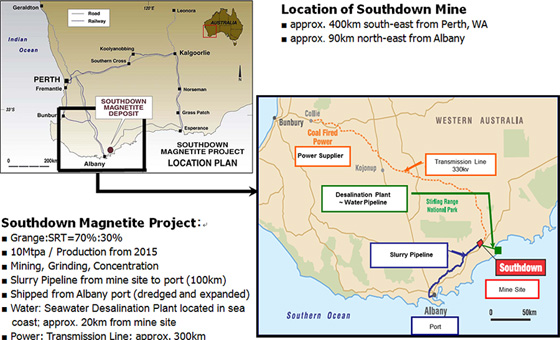