Sojitz Corporation and Nittetsu Mining Co., Ltd. conducted a total of 14 borings as the first phase of drilling work in the Arqueros Properties (approximately 50 square kilometers) located about 35 km east of La Serena, the capital of one of the Republic of Chile’s regions, acquired high-quality ore body, and discovered a new copper deposit.

The results of analysis and investigation of the cores (rock samples) acquired from the drilling work confirmed ore intersection of the ore body in the 13 of the 14 borings.
Based on the results of the first drillings, strong evidence of copper reserves were obtained, and as a result, Sojitz it expects that it will be able to explore, develop, and begin production in a relatively short period compared to development of copper deposits from an ordinary green field, and extremely efficient mining development is expected. For the second phase of work, a total of approximately 4000 m of borings will be conducted rapidly to confirm in greater detail the expanse and continuity of the deposit. Drilling is planned to be completed within three years to confirm the copper reserves. Sojitz will make a comprehensive assessment of the results and investigate a specific development plan. The drilling conducted this year will receive support from the Japan Oil, Gas and Metals National Corporation Overseas Geological Survey.

Sojitz and Nittetsu Mining signed an option agreement with Fondo de Inversion Privado Talcuna, a leading Chilean copper mining firm, to acquire prospecting and development rights to copper deposits in the Arqueros Properties in July of last year. Drilling with the aim of copper mine development began in September. 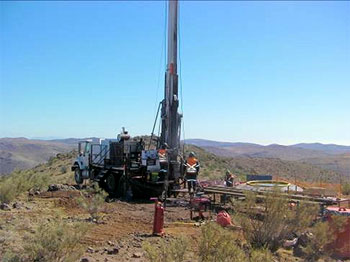 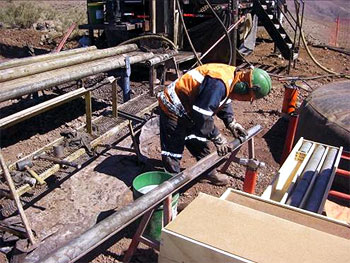 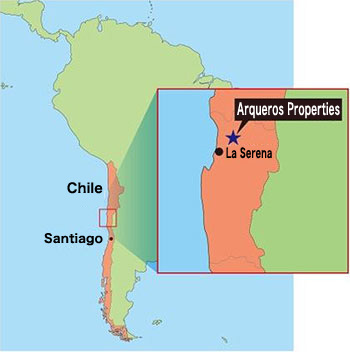 [Map of the Arqueros Properties region]

Sojitz acquired mining rights to an excellent copper deposit in Laos in 2009 and acquired an interest in the Gibraltar Copper Mine, which is currently in operation in Williams Lake, Canada. The recent acquisition is Sojitz’s third.

Sojitz will continue investing and participating in copper mining in the Asia-Pacific region including Asia, North America, and Australia and contribute to the stable supply of cooper.

Japan imports approximately 1.3 million tons of copper ore (on a copper content basis) annually, making it the world’s second largest importer after China. Copper is an essential metal used in infrastructure, automobiles, durable consumer goods, and many other applications. Demand is expected to grow, particularly in emerging market countries, from approximately 16 million tons in 2010 to 30 million tons in 2025, making the project even more important.