SOFCO Seafoods Inc. saw its plant destroyed by the Great East Japan Earthquake and the resulting tsunami in March of last year, and the company had to suspend operations, but thanks to the cooperation of many involved parties, it constructed a new plant in Unosumai Town, Kamaishi City, Iwate Prefecture and will begin production on March 1.

SOFCO Seafoods Inc. constructed a special-purpose flaked salmon plant with the latest manufacturing equipment. Annual production capacity was increased from 600 tons to 1,200 tons. In addition, the plant performs integrated production from raw materials to the final product to produce bottled flaked salmon for consumers and commercial flaked salmon for use in rice balls and other foods.

SOFCO Seafoods Inc. has set a target of increasing sales revenues to 1.6 billion yen by fiscal year 2014 including imports of vinegared mackerel, production of which has been outsourced to China. The company also hopes to hire new employees, gradually increasing employment to about 100 persons.

Sojitz Corporation and SOFCO Seafoods Inc. plan to hold a ceremony on March 8 commemorating the opening of the new plant in conjunction with the resumption of production. A number of municipal and prefectural officials including the mayor of Kamaishi City and the director of the Iwate Prefecture Regional Promotion Bureau plan to attend the ceremony. 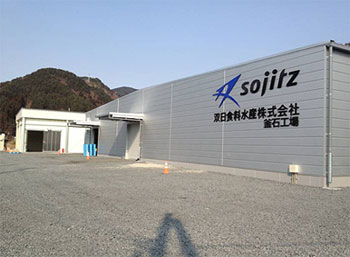 Overview of the New Plant

Overview of the Company