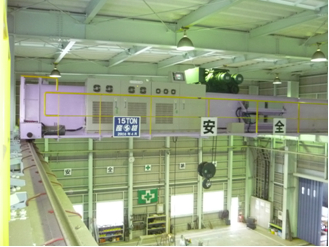 A hybrid crane equipped with a lithium-ion capacitor

The new system is a hybrid system that combines a storage battery with an alternating current power supply. The energy generated when the ceiling crane is lowered during use in a factory or other site is recovered* and stored in an ACT storage module for use to operate and movie the crane. By recovering and reusing energy that in the past was released in the air as heat, the power consumed by the crane can be reduced by about 30%, cutting costs through lower electricity consumption and contributing to lower carbon dioxide emissions from energy savings. The environmental contributions of this product were recognized, and the development project received a subsidy from Shimane Prefecture.

Sojitz invested in ACT in 2009 and has provided support including the assignment of personnel through Sojitz Machinery. Sojitz Machinery, which will act as the agent for sales of this product, has positioned the energy storage and supply field as a major growth field for the future and is accelerating its efforts in the environmental and energy sectors.

Sanki focused on recovering the energy generated when a crane is lowered as a means of reducing energy consumption by ceiling cranes and developed prototypes to improve the module storage capacity, usable life, and quality.

Lithium-ion capacitors are storage devices that combine the strengths of secondary batteries such as lithium-ion and lead batteries and electric double-layer capacitors, which can be charged very rapidly. They have long cycle lives and excellent charge and discharge efficiency and can be charged and discharged in short periods. Demand for lithium-ion capacitors is expected to grow in environmental and energy conservation sectors including solar power and energy recovery.

* Recovered energy is energy obtained when thermal energy generated when the brakes are applied is converted to electrical energy and reused as motive force. 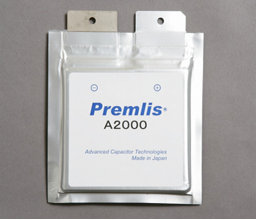