- Scope 3 Compatible Measures to Reduce Emissions throughout the Supply Chain -

Sojitz Corporation was commissioned by the Ministry of the Environment to conduct the 2011 Supply Chain Logistics Greenhouse Gas Emissions Volume Survey and Investigation Project. The project is intended to gain an understanding of emissions generated by logistics divisions and movement of employees and customers as specified in Scope 3, a new global standard for measuring greenhouse gas emissions, by conducting surveys of companies in Japan and making energy-saving diagnoses. The information will be used to reduce emissions throughout the corporate supply chain. Sojitz began recruiting companies for the survey today. 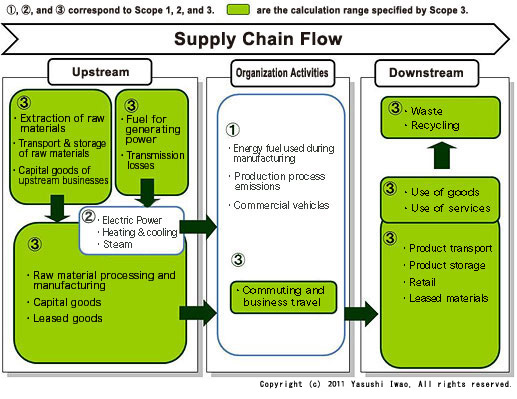 [Diagram of the Scope 3 Calculation Range]

Japan is obligated under the Kyoto Protocol to reduce its average greenhouse gas emissions from 2008 to 2012 by 6% compared to the base year (1990). The Scope 1 and Scope 2 measure methods currently in use cover greenhouse gases generated directly by the company, but do not include in the scope of the calculation emissions from subcontractors or from movement of personnel. As a result, achieving more accurate calculations became an issue.

The new Scope 3 standards cover the entire supply chain including the above emissions, which allows for more accurate determination of emissions generated by corporate activities. With the introduction of Scope 3, although the scope of the calculation is broader, the increase for companies in Japan, which is an advanced environmental country, is relatively small compared to other countries, and it is expected that it will be comparatively easy for Japanese companies to separate themselves from others by making efforts to reduce emissions.

The project will be implemented by Sojitz and Japan Climate Exchange (JCX), a subsidiary as indicated below with the aim of surveying and investigating the potential for carbon dioxide emissions in logistics and make a comparative analysis of supply chain emissions according to the logistics format.

Sojitz will work with JCX and other group companies to measure and reduce greenhouse gas emissions by domestic businesses.

Scope 3 is a global standard for measuring emissions adopted in October 2011 by the World Resources Institute (WRI), an American think tank, and the World Business Council for Sustainable Development.
Scope 3 adopts the GHG Protocol of common rules used by government and businesses. The Protocol specifies a scope of calculation that includes logistics divisions and movement of employees and customers, areas that could not be determined under Scope 1 (the company’s own plants, offices, vehicle, and so on) and Scope 2 (energy such as electric power consumed by the company). The preparation of guidelines compatible with Scope 3 is under consideration in Japan too. Under Scope 3, it is necessary to calculate the emissions generated by each employee’s commuting and business travel, so there are concerns that workloads will increase not only for small and medium businesses, but large firms as well. This survey will contribute to preparations for complying with Scope 3 prior to the adoption of guidelines.