Sojitz to Establish Industrial Park in Outskirts of Chennai, India

In Combination with Parks in Indonesia and Vietnam, New Park Will Respond to Growing Demand in Asia

Sojitz Corporation will establish the Sojitz-Motherson Industrial Park (SMIP) in the outskirts of Chennai, Tamil Nadu, India in collaboration with the Motherson Group, India’s largest maker of automobile parts such as wire harnesses. The SMIP is the first Japanese-affiliated general industrial park in India.

The SMIP will be established in the Kanchipuram District, approximately 45 km southwest of Chennai, and will have an total development area of 115 ha (a little more the twice the size of Tokyo Disneyland). Sojitz will provide 34% of the capital of the new company, and the Motherson Group will provide 66%. Total investment will be approximately 5.0 billion yen. The first phase of construction is scheduled to begin in the winter of 2012, tenants will be able to begin construction of plants in the summer of 2013, and the infrastructure will be complete in the summer of 2014. 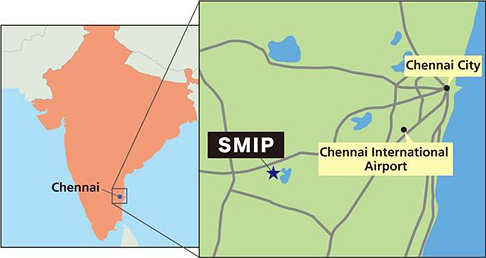 [Map of the Vicinity of the SMIP]

Currently in India, undeveloped fields are being sold to companies setting up new operations in the area as ordinary industrial land for industrial parks, and the companies have to pay for and manage ground preparation and infrastructure facility development such as water and sewers, but the SMIP will feature a permanent management office with Japanese personnel, centralized water processing facilities, warehouse and logistics facilities, rental plants, and other service facilities to precisely meet the needs of Japanese firms that are advancing into the country.

Chennai, which is referred to as the Detroit of South Asia, has a concentration of many of the world leading auto makers including Japanese makers, and consequently, offers a geographical advantage. The merits of establishing operations in the region, particularly for automotive parts makers, are considerable. A plant of the world’s largest telecommunications maker is also in the vicinity, and it is expected that numerous other firms will also establish a presence in the region.

The SMIP is the fourth overseas industrial park developed by Sojitz. Sojitz previously established the GIIC Park in Indonesia, which is the only ASEAN country in the G20, the Loteco Industrial Park and the Long Duc Industrial Park in Vietnam, which is undergoing rapid development and is said to be the leader among the VISTA countries to be followed by the SMIP in India, a leading Asian country. Sojitz will continue meeting the demand for development of economic levels in countries where customer businesses are establishing operations while conducting business that leads to the creation of supply chains among these industrial parks.

Overview of the Industrial Park

Overview of the Motherson Group