Sojitz and Nagasaki Prefecture are already conducting smart grid (next-generation electric transmission network) trials at Huis Ten Bosch as any 2011 Next-Generation Energy Technology Verification Project selected by the New Energy Promotion Council. With the execution of the current memorandum, Sojitz will collect various data concerning day-to-day activities at Huis Ten Bosch and other facilities and conduct trials based on various scenarios tailored to regional lifestyles in order to encourage collaboration among businesses in Nagasaki Prefecture and toward the creation of new business through implementation of these trials. 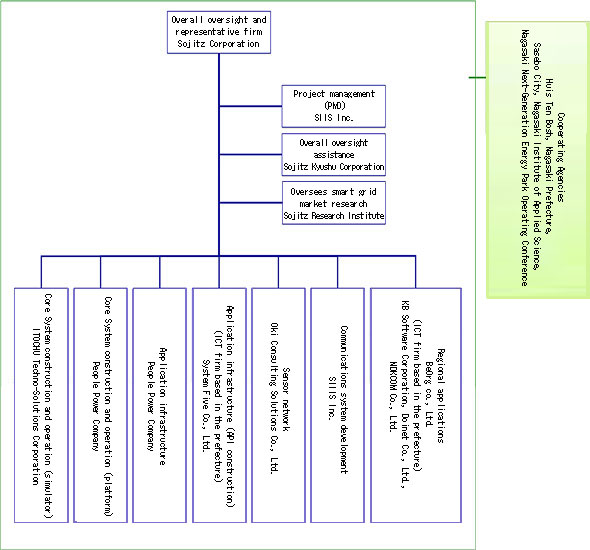 Overview of the Trials

Under the trial plan, smart meters that control electricity consumption using power measurement and communications functions as well as a smart taps and motion detectors will be installed at Huis Ten Bosh, power supply and demand forecasts and target internal supply rates set, and system installation and operating costs determined to create an optimized power supply and demand model. In the first year, hardware such as smart meters and electronic displays (digital signage) will be installed mainly in offices at Huis Ten Bosh. Utilization of the optimized electric power supply and demand model ultimately developed in other regions of Japan and overseas will also be considered.

The global smart grid related market is expected to grow from approximately 940 billion yen in 2009 to approximately 5.8 trillion yen in 2020. Since the Great East Japan Earthquake in March of this year, interest has increased substantially in Japan in the development of an energy-saving, low-carbon society by employing smart grid technologies.