Sojitz Corporation and Mitsubishi Heavy Industries, Ltd., Toyo Engineering Corporation, Sumitomo Corporation, entered into an Early Work Agreement covering a portion of the engineering work (plant basic design, preparation of engineering documents and contracts, site surveys, and other work) for an ammonia and urea fertilizer plant with the Ministry of Geology, Mining and Industry (MGMI) of the Republic of Angola. 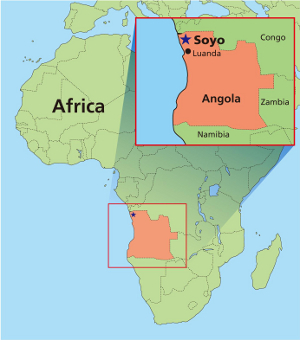 [Map of the fertilizer plant location]

The ammonia and urea fertilizer plant will be constructed in Soyo, Zaire Province, about 300 km north of Luanda, Angola’s capital. Construction including production and shipping facilities is scheduled to be completed by the end of 2015. The planned daily production capacity is 2,000 tons of ammonia and 1,750 tons of urea. The plant will effectively utilize excess natural gas supplied to an LNG plant under construction in Soyo. Angola is dependent on fertilizer imports, and this is an important project that will contribute to a switch to domestic production through the effective use of domestic natural gas.

Angola’s economy is growing rapidly, and the average GDP growth rate is about 11.5% from 2001 to 2010 thanks to the presence of abundant energy and metal resources. The Angolan government has adopted a policy of moving away from an industrial structure centred on petroleum resources and promoting industrial diversification. Natural gas retrieved from offshore facilities is gathered in the Soyo region. Production facilities for LNG, electricity generation, and fertilizer are being developed.

The global population is believed to be 7 billion currently and is expected to reach 9.3 billion by 2050. The population of Africa is also expected to grow rapidly, from about 1.0 billion today to 2.1 billion in 2050. In conjunction with this population growth, global grain production will increase by about 60% from 2.143 billion tons in 2000 to 3.420 billion tons in 2050, and raising food production will be a crucial issue in the future. Fertilizers are essential for efficient and sustainable agriculture, and this project will make a contribution to addressing this issue.

The four member companies of the Japanese consortium also plan to obtain the order for plant engineering, procurement and construction following the Early Work. The entire project including peripheral infrastructure will be worth more than 100 billion Japanese yen.