Sojitz Corporation launched a mega-solar independent power provider (IPP) business in Mixdorf, Germany approximately 100 km south of the German capital Berlin. Total project costs are approximately 55 million euro (6.1 billion yen). The project has a total generating capacity of 24 MW, making it one of Germany’s largest solar power businesses. Sojitz has been operating a solar power business with a 3 MW installed capacity in Betzweiler in southern Germany since 2010. The Mixdorf project is Sojitz’s second in Germany. 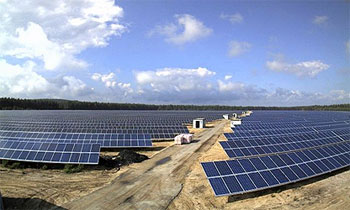 The Solarpark Mixdorf power generating facility is a large-scale project with approximately 100,000 solar panels, installed over 80 hectares (about 20 times bigger than the Tokyo Dome). The facility was completed and began operating in July, and is already providing a stable supply of power. Sojitz entered into a long-term 20-year electricity sale agreement with EON-Edis AG, Germany’s public power company, to sell electricity for 0.2207 euros/kilowatt hour (approximately 24.2 yen), the rate specified in Germany’s feed in tariff (FIT, a fixed rate purchasing system).

Engineering, procurement, and construction (EPC) for the project were carried out by Wirsol Solar A.G., one of Germany’s leading PV-companies and Sojitz’s consortium partner in the European solar power business.
It is presumed that the European countries by which the environmental business law proposal is fully fixed became a driving force, and the amount of introduction in the whole world of solar power generation amounted to 40 GW at the end time of December 2010. Especially in Germany, in accordance with the renewable energy law revised in 2004, nationwide efforts are being made to promote renewable energy sources that do not rely on nuclear power, being the renewable energy advanced nation which has introduced about 17 GW equivalent to 43% of the amount of world introduction. Also, Germany set a target of obtaining 50% of all energy from renewable sources by 2030 and the future continuous growth in solar powered business is expected.

Under the Shine 2011 medium-term management plan that started in 2009, Sojitz positioned the environment and new energy sources as new growth fields and set Environment & Urban Infrastructure Development Office in April 2011 . That will focus on smart businesses as future earnings drivers while also securing earnings through development and operation of environmentally friendly social and industrial infrastructure and by providing high-value-added services made possible by innovations in information technology. Sojitz is also using the expertise gained in the solar power business to build a solar power value chain and will undertake business in other renewable energy fields as well. 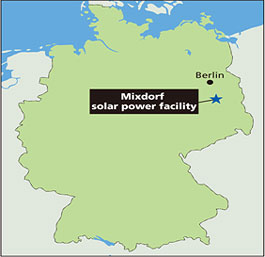 [Location of the solar power facility in Mixdorf, Germany]