Sojitz Corporation will expand the Greenland International Industrial Center (GIIC), an industrial park located in Deltamas City, Indonesia. Sojitz is developing Deltamas City jointly with the Sinar Mas Group, one of the largest Chinese-Indonesian conglomerates in Indonesia. The GIIC will be expanded from the 400 ha currently available for sale in its first phase by an additional 300 ha on adjacent property to meet the demand for land to expand production lines in conjunction with Japanese and other companies establishing operations or increasing production in Indonesia, where the manufacturing industry is undergoing remarkable growth. The second phase of development will add 600 ha to the 700 ha from the first phase for a total of 1,300 ha. 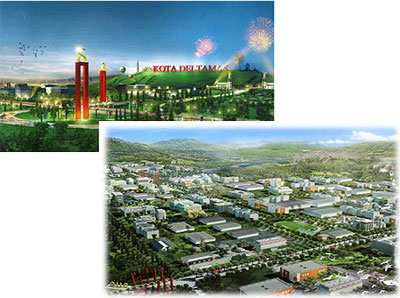 Perspective view of the GIIC (conceptual)

The phase one area of the GIIC is currently available for sale, and more than 30 companies in the motorcycle and automobile parts, consumer electronics, and consumer goods industries have decided to establish operations there and have already purchased 300 ha. The influx of foreign companies from Japan and other countries to Indonesia continues to grow, and a decision was made to convert a 400 ha lot adjacent to the phase one area into industrial property and make it available for sale. The additional parcels will be transferred in phases starting in about April 2012. This addition will make it possible to meet diverse customer needs for parcels ranging from 1 ha to 100 ha.

The GIIC is located in Bekasi Regency, 37 kilometers east of Jakarta, the capital. There is direct access to the GIIC from a multi-lane road in Deltamas City by way of an exclusive interchange from JAKARTA-CIKAMPEK expressway, providing convenient logistics. In addition, available land in existing industrial parks is becoming scarce, and the GIIC is the closest new Japanese-affiliated industrial park to Jakarta. As a result, it is expected that automotive parts and consumer electronics makers as well as foodstuffs producers and companies in other consumer industries will establish operations in the park.

Indonesia has abundant natural resources including natural gas,oil and coal and strong exports, which support steady economic growth. Gross domestic product (GDP) in 2010 was approximately equivalent to $750 billion, making Indonesia the world’s 18th largest economy, and the only country in Southeast Asia to participate in the G20 (a financial summit of the world’s 20 leading economies). Indonesia accounts for nearly 40% of the 10 ASEAN countries in terms of population and GDP and is positioned as a central ASEAN nation.

Indonesia has a population of 237.6 million, the fourth largest in the world, and sales of automobiles, motorcycles, and consumer electronics and goods are strong as a result of the expansion of the middle class in conjunction with rising incomes. Attention is focusing on Indonesia as a consumer market following China and India, and many Japanese and other foreign firms are expected to establish operations there.