Sojitz Corporation and Tsukishima Kikai Co., Ltd. received notice from the New Energy and Industrial Technology Development Organization (NEDO) that an organizational study for a project to raise the efficiency of low-grade coal-fired electric power plants using steam tube dryer systems in the Republic of Indonesia*1 was selected for implementation, and the two companies have started the study.

To meet its strong demand for electricity, Indonesia is supplying electric power from thermal electric power plants that use the country’s abundant reserves of low-grade coal that contains a high moisture content and has a low heat value known as pitch coal*2 or brown coal.*3 Low-grade coal is an inexpensive fuel, but when burned, the generating efficiency of the power plant is low compared to plants that use bituminous coal and the volume of carbon dioxide generated per unit of electricity is high.

For this project, Tsukishima Kikai will conduct various low-grade coal drying and handling experiments and dried coal combustion experiments using the steam tube dryers that it has provided for a wide range of applications and will investigate the feasibility of their use at electric power plants.

Sojitz will employ its extensive experience gained through 40 years of using low-grade coal and conducting business in Indonesia to negotiate with the Indonesian government and other related agencies and investigate the streamlining and commercial viability of thermal power plants.

In the medium-term business plan adopted and announced in May of last year, Tsukishima Kikai set focusing on the environment and energy fields and expanding overseas business as its two core policies.

Going forward, Sojitz and Tsukishima Kikai will strive to contribute to the effective use of energy and reducing carbon dioxide and other greenhouse gas emissions around the world by converting low-grade coal with a low energy value into high-grade coal using drying technology.

2. Structure and features of steam tube dryers
Tsukishima Kikai’s steam tube dryers are rotary dryers that use steam as the heat source for indirect heating and can be used to dry coal and numerous other materials such as ores and resins including terephthalic acid. Tsukishima Kikai has already installed more than 500 steam tube drivers in Japan and overseas and has an established track record of operation. 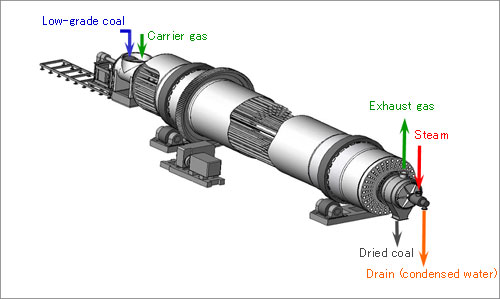 Structure of a Steam Tube Dryer

*1 On July 7, 2009, NEDO announced that it was outsourcing to Tsukishima Kikai and Sojitz an organizational study for a project to raise the efficiency of low-grade coal-fired electric power plants in the Republic of Indonesia under its 2011 greenhouse gas countermeasure technology promotion project.
This scheme is intended to identify specific projects for reducing greenhouse gases that can verify the effectiveness of Japan’s outstanding low-carbon technologies and products overseas. The scheme will involve a feasibility assessment to support adoption and transfer of the low-carbon technology necessary for efficient and effective organization, establishment of methods for assessing the reduction in emissions, and research on financing relating to implementation of the project as well as other systems and environmental development policies.

*3 Brown coal has moisture content in excess of 30% and the heat value of less than 4,500 kcal/kg. Trading on global markets of brown coal is low compared to high-grade gold because of its poor transport efficiency and energy efficiency, but it accounts for one-quarter of global coal reserves, and as a result research is being conducted on technologies to improve brown coal by raising its transport and combustion efficiency.