Global demand for lime products in 2009 was about 300 million tons with a value in excess of 2 trillion yen. Demand in China accounted for about 200 million tons of the total. As China’s economy develops, the market for lime is growing at about 10% annually. Demand is also growing in other developing countries including India and ASEAN countries, and global demand is expected to double to 600 million tons by 2016.

Sojitz and Ube Material will sell the lime products produced at the Sunland plant to industrial regions in China and export some to South Korea, Taiwan, and other countries. Sunland plans to expand production from 120,000 tons annually now to 300,000 tons annually within three years, and to further increase production to 700,000 tons annually in the following five to 10 years. Sojitz and Ube Material are investigating additional opportunities to expand business in Asia and seek to increase production sites in India and Southeast Asia and ultimately acquire the top share of the Asian market.

Map of the Plant Vicinity 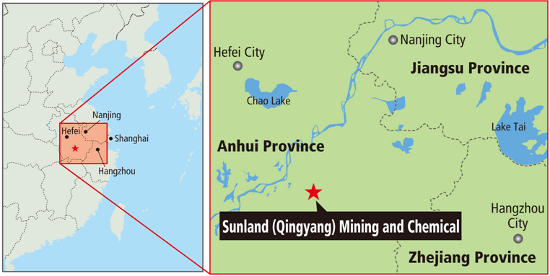