Sojitz Corporation’s wholly-owned subsidiary Sojitz Logistics Corporation has launched an overland transportation service connecting Vietnam, Cambodia and Thailand. The service, known as Cross Border Transportation Service (CBT Service), runs along the Second East-West Economic Corridor, which stretches 850km from east to west between Ho Chi Minh, Phnom Penh and Bangkok in the southern part of the Indochinese peninsula, enabling reliable and efficient international intermodal transport.
Sojitz Logistics has been investigating the possibility of an overland transportation service between Ho Chi Minh, Phnom Penh and Bangkok since 2005. Thanks to the creation of an environment which has made it feasible to transport freight across the region by road, it has now been possible to officially launch the service. Previously freight crossing the border between Vietnam and Cambodia had to be transhipped, but through cooperation with a large, local logistics company, Sojitz is now the only Japanese logistics company to be able to offer a through transit service without transhipment. This means that the sea and overland route from Tokyo to Phnom Penh which previously took about 15 days, now goes via Ho Chi Minh and only takes about 10 days. In addition to being a reliable and efficient logistics service, therefore, it also offers the possibility of reducing transit times and transportation costs.

The Indochina area is currently experiencing strong, sustained economic growth in the region of 6% a year. As an area rich in mineral resources such as copper and rare metals and timber resources such as lumber, the Second East-West Economic Corridor is an important route for the transportation of natural resources. The region is also a major base of production reliant on the transportation of materials and manufactured goods for the apparel industry, as well as raw materials and parts for the auto-manufacturing industry. As such, the need for smooth, reliable transportation is increasing, and the maintenance of logistics routes connecting these regions is an infrastructural issue crucial to economic expansion. Furthermore, the combined area of the Greater Mekong Subregion (Vietnam, Thailand, Cambodia, Myanmar and Laos) and Yunnan Province, which borders the region upstream, is an enormous economic zone with a population of approximately 230 million people which offers huge potential, not just as a base for resources and manufacturing, but as a future consumer market.

Sojitz will continue to develop competitive and efficient services that include: the expanding wholesale business in Vietnam; making use of Cai-Mep Agri Port (Ba Ria
Vung Tau Province, Vietnam) the largest special-purpose grain port facility in Southeast Asia, as well as Interflour Vietnam, a milling company inland from the port, for importing and processing resources; and domestic and inland international transportation. Furthermore, in order to keep step with the continuing economic expansion of the Indochina region, Sojitz and Sojitz Logistics will expand their overland transportation services in the future, making use of other corridors in the area. 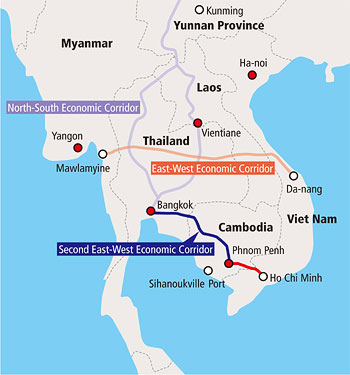 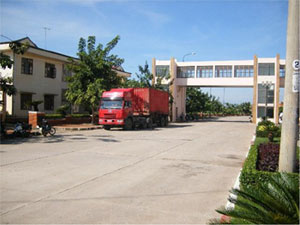 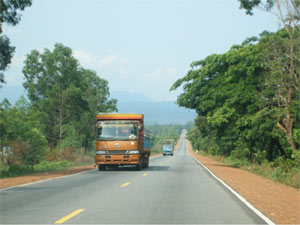 １）Shorter transit time
Possible to shorten the transit time from Tokyo to Phnom Penh by 5 days, and Bangkok to Phnom Penh by approximately 5 days.
２）Greater frequency of calling and number of shipping routes
Ho Chi Minh Port is vastly superior to Sihanoukville Port in terms of the number of shipping companies as well as vessel calling there. It is also possible to dock very large ships (over-Panamax container ships).
３）Reduced transportation costs
The Ho Chi Minh route offers the potential for huge reductions in transportation costs compared to the previous route to Phnom Penh via Sihanoukville Port.
４）Variety of different mode of transportation offered
By using warehouses in Phnom Penh, Bavet (on the Cambodia side of the Vietnam-Cambodia border) and Ho Chi Minh, it is possible to offer various different mode of transportation.

■Economic indicators for each country

Note: GDP is based on figures for 2010
Source: JETRO

■Amount of trade between each country