- Customizable Coloring for Your Own Original Design -

Sojitz Group’s consumer goods company Sojitz General Merchandise Corporation has acquired the exclusive rights to import and sell suitcases and casual bags from the French brand DotDrops in Japan. Sojitz GMC signed the exclusive distribution agreement with the French company Bernard Ehret Design, and is due to start selling into the Japanese market in summer 2011.

The DotDrops brand goes beyond merely focusing on functional performance, promoting individuality, originality, urban elegance, and a sense of people’s personality and lifestyle.
The brand’s core market is creative people in their 20s-30s who are keen to adopt a unique style.

DotDrops suitcases have an 11 x 15 grid of raised dots on the surface (165 in all). Customers can color the dots in a pattern of their choosing to create a suitcase that it is entirely original to them. In addition to making their suitcase instantly recognizable at baggage reclaim, it also allows users to express their individuality when they are walking about with it.

As well as the excellent design, the case itself is made using a very strong, durable polycarbonate resin, and the underside is fitted with 4 Silent Caster wheels which swivel 360 degrees and which are produced in Japan by Hinomoto, a brand with an established reputation for smooth running.

Bernard Ehret Design is a company that was founded by Bernard Ehret in 1967 and which is based in Molsheim in the French region of Alsace. It was originally known as the Société Alsacienne de Maroquinerie.
The Winter Olympics held in Grenoble in 1968 saw the company grow through sales of sports bags and, in particular, a diving bag made from a highly waterproof fabric that became a big hit. After this, the company started producing fashionable travel bags. In 1979 Bernard Ehret established the Jump brand, and from that point on the company continued to expand, becoming one of France’s most high profile bag manufacturers.

Sojitz GMC is scheduled to start selling DotDrops products nationwide towards the end of July 2011 through multi-brand stores, bag retailers and variety goods shops, as well as on the internet. The retail price range is expected to be between \25,000 and \35,000. We intend to expand the product line to include soft casual bags as well as suitcases with the aim of achieving sales of \500 million (retail price base) after 3 years. 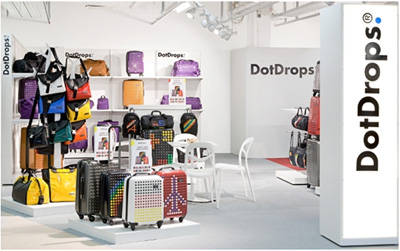