Sojitz Corporation signed a long-term purchase agreement with Sao Paolo, Brazil-based Braskem S.A., South America’s largest petrochemical company. Sojitz will purchase butadiene from Braskem, a strategic partner in Brazil, over five and a half years starting in April 2011. Sojitz has positioned Brazil as a high-priority country.

Butadiene is a raw material that is extracted from C4 fractions that is produced at the same time as ethylene and propylene when cracking naphtha, a petrochemical material. It is used in the manufacture of synthetic rubbers and ABS resin. Worldwide demand for butadiene is approximately 9 million tons annually, of which about half is used for manufacturing synthetic rubber used in tires.

Naphtha distilled from crude oil is a full-range material that includes more C4 fractions from which butadiene is extracted, than other materials such as natural gas. A transition is being made in the petrochemical industry from using naphtha to natural gas, which has the highest cost performance when producing ethylene, a key product. Natural gas, however, contains few C4 fractions from which butadiene is distilled, so C4 fractions are expected to be in short supply. 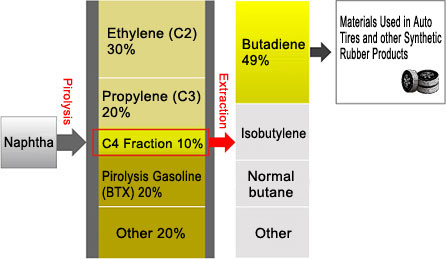 [Extraction of Butadiene from C4 Fractions, a By-Product of Ethylene]

Sojitz has maintained a trading relationship with Braskem for 40 years and is its largest foreign shareholder. Sojitz engages in the bio-ethanol and sugar production business through ETH Bioenergia S.A., a joint venture established with Odebrecht S.A., which is the parent company of Braskem. Braskem is engaged in export and sale of bio-ethanol and ethyl tertiary butyl ether (ETBE), a biomass fuel manufactured from butadiene and C4 fraction isobutylene.

Through this long-term butadiene purchase agreement, Sojitz and Braskem will strengthen their strategic partnership and are examining the commercialization of high added value butadiene derivative products in the future. The two companies plan to attract Asian manufacturers and expand the C4 chemical chain with the goal of manufacturing and selling synthetic rubber for tires and ABS resin, derivative products of butadiene.