A Japanese investor group consisting of JFE Steel Corporation (JFE), Nippon Steel Corporation (NSC), Sojitz Corporation (Sojitz) and Japan Oil, Gas and Metals National Corporation (JOGMEC) and a Korean investor group consisting of major Korean steel producer POSCO and National Pension Service (NPS) entered into an agreement with the controlling shareholders of the Brazilian niobium company Companhia Brasileira de Metalurgia e Mineracao (CBMM) under which the Japan-Korea partnership will acquire a 15% stake in CBMM. Niobium is a critical alloying additive in the production of high-grade steel products. As the most comprehensive supplier of niobium products in the world, CBMM is in a position to secure a continuous supply system of the metal as the need for high-grade steel products grows.

The four Japanese companies will use two special purpose companies (“SPC”) to acquire a 10% stake and the two Korean companies will use a separate SPC to acquire a 5% stake in CBMM. The amount of the investment by the Japan consortium and the Korea consortium will be $1.3 billion (approximately JPY 108 billion) and $650 million (approximately JPY 54 billion), respectively, and each of the six consortium partners will indirectly hold a 2.5% stake in CBMM (for a combined total of 15%). This investment in such a significant supplier of niobium comes at an opportune time and has real strategic value to the companies of the Japanese and the Korean consortium.

In addition to the acquisition of CBMM shares, JFE, NSC, POSCO and Sojitz entered into a long-term niobium supply agreement with CBMM, assuring that the stable relationship these companies have long had with CBMM continues.

JOGMEC decided to participate in the consortium according to Japanese government’s policy to secure resources. This transaction represents the first project of the equity participation scheme for mining business under operation after the amendment of JOGMEC law in 2010.

Niobium is indispensable in the production of high-grade and special steel products. It is distinguished by its ability to dramatically enhance the strength, durability, and heat resistance of steel products with the addition of only trace amounts. High-grade and special steel products and superalloy products containing niobium include pipelines, automotive steel, large-scale construction steel, turbines, aircraft engines, including the ones used in the space shuttle, and other cutting edge machinery.

CBMM, a Brazilian company established in 1955, owns a niobium mine, refining plant and metallurgical production facilities in the Araxa area of Minas Gerais State. Brazil holds the largest part of total known niobium reserves in the world according to data from official agencies, and CBMM is thought to hold rights to the best niobium reserves in Brazil.

The growth of emerging nations is propelling the demand for high-grade steel products, and security of niobium supply sources is becoming an important issue. This transaction will ensure stable supply of niobium to both Japan and Korea. 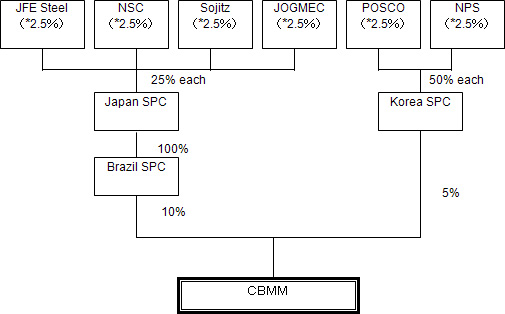 Outline of the CBMM