Sojitz Corporation (Sojitz) will invest and participate in a marine chemical project in India for the production of Sulphate of Potash (SOP), a fertilizer, bromine and industrial salt. The project is being implemented by the leading Indian industrial conglomerate, Archean Group, in the Kutch district of Gujarat in northwestern India. The marine chemical project (with an investment amount in the first phase of approximately 18 billion yen) is expected to begin operations in 2012. Sojitz is participating in this venture through equity and loan to the extent of 3.5 billion yen. Sojitz will market the SOP and industrial salt outside of India.

The project, the first of its kind in Asia, will use the sub soil natural brine water deposits in the Rann of Kutch to produce SOP, bromine, and industrial salt. 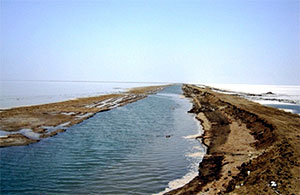 [Site of the marine chemical project in the Rann of Kutch, Gujarat]

SOP is a fertilizer used for high quality crops including fruits and vegetables. Until now, India has been an importer of SOP, but with the launch of this project, it will become a potassium producer.

Industrial salt is used as a base material in numerous products such as caustic soda, vinyl chloride, soaps, and glass. Approximately 8 million tons of salt is consumed every year in Japan, of which about 7 million tons are used in industry, and nearly the entire quantity is imported.

Opportunity also exists in the future, to construct a wind power or solar power facility next to the expansive salt works to provide the necessary electricity and make the project carbon free and environmental friendly.

Outline of the Marine Chemical Project