Business Expertise to be Used to Expand Operations to Brazil and Other Countries. Sojitz Contributing to Stable Food Supplies.

Sojitz Corporation established Sojitz Buenas Tierras del Sur S.A. (“BT”) as a wholly-owned subsidiary in Argentina to conduct agricultural production of soybeans and other products, and will begin producing and selling soybeans and grain products this year in cooperation with Buenos Aires based Cazenave y Asociados S.A., a leading Argentinean agricultural business operating company. This is the first time that a Japanese major trading firm has directly established an overseas subsidiary to engage in the agricultural business.

Sojitz invested approximately 500 million yen in fiscal 2010 and will use approximately 11,000 hectares (equal to about twice the area of central Tokyo) in Argentina’s rich Pampas agricultural region to produce a total of about 30,000 tons of soybeans and grains. In fiscal 2011 and later, Sojitz will expand production in Argentina while developing agricultural business in other South American countries including Brazil, which has considerable production and supply capacity, with the expected production of producing approximately 1,000,000 tons of grains in South American by 2017. These grains will be sold primarily by the Sojitz Group to Asian countries which have significant growth in demand for grains.

Global demand for soybeans was approximately 230 million tons in 2009, and with increases in demand for foodstuffs in conjunction with a rising global population and the economic development of emerging countries, demand has increased by about 35 % over the past 10 years. In the future security of food will be of the utmost importance. 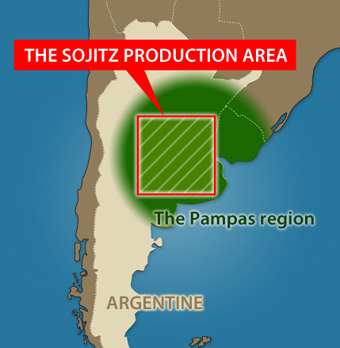 Overview of the New Company