Tokyo, October 14, 2010 --- Sojitz Corporation, Mitsubishi-Hitachi Metals Machinery, Inc. and Hitachi, Ltd. received an order for upgrading of existing pickling line tandem cold mill (PL-TCM) from Tata Steel Ltd.and Kick Off Meeting was held at Sojitz Head Office, Tokyo under the presence of Mr. H.M. Nerurkar, Managing Director of Tata Steel. This project is expected to complete in 2013 Tata Steel is a core business of the Tata Group, the largest conglomerate in the Republic of India, and is India’s largest private steel corporation. 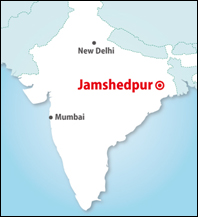 The former Nissho Iwai Corporation (the current Sojitz Corporation), Mitsubishi Heavy Industries, Ltd. and Hitachi, Ltd. received an order in 1998 for the PL-TCM, which began operating in 2000. Following upgrading of the facility, the production scale of the PL-TCM is expected to increase from 1.3 million tons to 2.04 million tons. The PL-TCM is designed to manufacture high tensile strength steel sheets, and the upgraded facility will serve as a rolling mill for high-quality steel sheets for motor vehicles, and feed CAPL（Continuous Annealing and Processing Line）to be established and operated under J/V between Tata Steel and Nippon Steel. The upgrading order is as a result of Tata’s recognition of Mitsubishi-Hitachi Metals Machinery world-leading pickling and rolling technologies, Hitachi’s highly-reliable electrical control technology for rolling mills, and Sojitz’s comprehensive capabilities as well as the past delivery track record.

Tata Steel acquired Corus, an Anglo-Dutch steelmaker, in April 2007 and currently has the world’s 10th highest steel manufacturing productions, with more than 81,000 employees and annual sales of US$22.8 billion (approximately 2 trillion yen) in fiscal 2009. Tata Steel plans to expand its crude steel production at its leading steel plant in Jamshedpur, Jharkhand State to 10 million tons and to construct a new integrated steel plant (with capacity of 6 million tons) in Orissa to meet increasing demand for steel both around the world and in India as its economy grows.

India has been enjoying rapid economic growth over the past few years with a GDP growth rate at about 7%. A large number of new projects are planned by domestic and foreign steel companies as there are good prospects for mid- to long-term growth and development that will boost infrastructure requirements and demand for high-quality steel sheet for vehicles. Sojitz, Mitsubishi-Hitachi Metals Machinery, and Hitachi are committed to working towards obtaining more orders for steel plants in the expanding Indian market.