Japan Climate Exchange Corporation (JCX), a joint venture of CoalinQ Corporation, a wholly-owned subsidiary of Sojitz Corporation, and Smart Energy Co., Ltd., began full-scale operations in July 2010 and completed the first transaction under the Tokyo Cap-and-Trade Program operated by the Tokyo Metropolitan Government. The transaction was for 22 tons over five years at a price of 12,000 yen per ton. 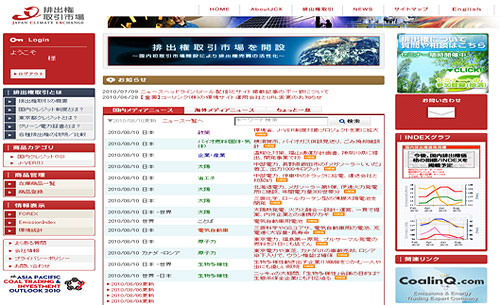 The emissions rights recently traded were created by Osaka-based Daiwa House Industry Co., Ltd. and a company that installed energy-saving facilities. The installing company submitted an application to the Tokyo Metropolitan Government today. This is the first application under the Tokyo Cap-and-Trade Program. The generated credits will be purchased by Tokyo-based Ginga Energy Japan Co., Ltd.

Under Tokyo’s mandatory emissions volume reduction and emissions rights trading program, businesses that meet certain conditions and have business sites in Tokyo are obligated to reduce emissions by 6% to 8% from the base year during the first phase (2010-2014). It is expected that emissions rights trading will increase substantially as businesses carry out their reduction obligations. Saitama Prefecture will also introduce a cap and trade program in 2011, and such programs are expected to spread to other regions in the future.

In light of these developments, JCX expects the emissions rights market to become increasingly active with the aim of preventing global warming. The marketplace is expected to handle 800,000 tons of carbon dioxide in 2015 and 1.3 million tons in 2020.

Overview of the Tokyo Cap-and-Trade Program