Royal Elastics was established in 1996 by Tull Price and Rodney Adler, two young entrepreneurs, in Australia. The key feature of Royal Elastics sneakers is a system for putting on and removing the sneakers that use elastics in place of laces. Tull Price, the designer and originator of this idea, noticed that skateboarders at the college campus tucked the laces into their shoes, leading to the innovative idea of sneakers without laces. Eliminating the laces raised the degree of design freedom and makes putting on and removing the shoes easier, resulting in shoes with unique styles that fit well and are comfortable to wear.

The designs of these laceless, innovative shoes attracted considerable attention in the fashion world, and sales expanded to markets around the world almost immediately. Royal Elastics has become a brand that is supported by many global celebrities including artists, musicians, athletes, and designers. The motif of the brand name and logo is the fleur-de-lis, the crest of the French monarchy.

Royal Elastics moved its headquarters to Los Angeles, California last year and Chief Designer John Bondoc has taken on a central role. In addition to its existing lineup of athletic styles, Royal Elastics has adopted products with greater awareness of lifestyle and fashion. The Royal Elastics theme is “No time for laces.” Royal Elastics implements a new theme every season based on the concept of the active Royal Elastics character seeking new worlds by embarking on an adventurous journey. 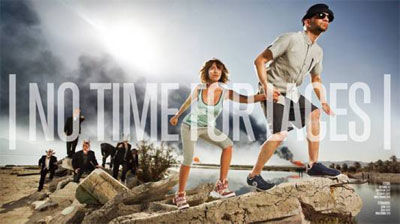