The Carthage onshore gas block is an unconventional tight-sand gas development block that Sojitz acquired in July 2007 and is thought to have reserves in excess of 90 billion cubic feet (equivalent to 15 million barrels of crude oil). Also, in addition to the tight-sand gas layer, the presence of a broad shale gas layer in a deeper layer of the block has been confirmed. Sojitz is currently conducting test drilling to confirm the extent of the shale gas layer, and flow tests have confirmed the potential for good productivity. Sojitz plans to use horizontal drilling in the deep shale gas layer too, doubling daily gas production to 20 million cubic feet (equivalent to 3,300 barrels of crude oil) in the future.

Sojitz plans to invest 3.0 billion yen in tight-sand gas and shale gas production at the Carthage gas block this year and will proceed with further development in the future. 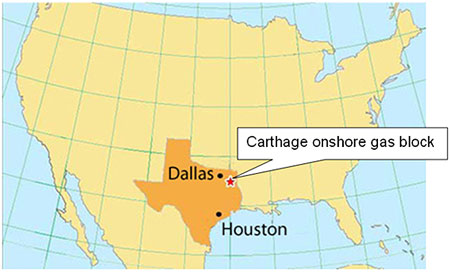 [ Map of the Carthage Gas Block in Texas, USA ]