Delivery of three LNG Vaporizers to the Jiangsu Terminal was recently completed, and delivery of the other three to the Dalian Terminal is scheduled in May. The Jiangsu and Dalian LNG Receiving Terminals are PetroChina’s first, and a major construction project for PetroChina with a total cost of approximately 175 billion yen. LNG will be imported from Qatar, Australia, and other locations and used for industrial purposes and as city gas in China. The LNG Receiving Terminals are scheduled to begin in operation in the first quarter of 2011. 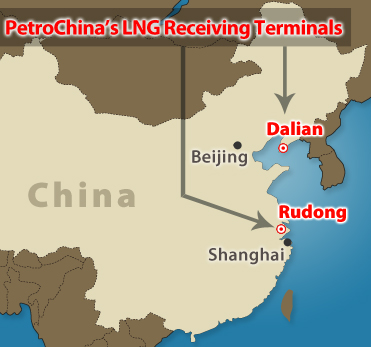 LNG Vaporizers are equipment for vaporizing LNG (Liquefied Natural Gas) at minus 162°C to natural gas and are a major component of LNG Receiving Terminals. Sumitomo Precision Products’ Open Rack type LNG Vaporizers flow sea water on the outside surface of panels with multiple heat-exchanger tubes to warm and vaporize the LNG inside. Since sea water is used, operating costs can be saved, making the vaporizers economical. The vaporizers’ key feature is easy monitoring, maintenance, and inspections, and they offer outstanding reliability and safety.

LNG attracts attention as an environmentally-friendly clean energy with lower carbon dioxide emissions during combustion than coal and oil and produces no sulfur oxides or soot. The Sojitz Group has an extensive track record of fulfilling orders for LNG Vaporizers and their peripheral equipment in Europe, North America, South Korea, India, and China.

Demand for natural gas in China is rising as the country works to eliminate energy shortages and address environmental issues. Consumption is rising 10% each year and is expected to double by 2020 compare with the consumption of 2008. As China’s economy undergoes rapid growth, plans for numerous LNG Receiving Terminals have been adopted. Sojitz Machinery is working with Sumitomo Precision Products in focusing on Chinese markets and obtaining additional orders.