The new company, which will retain the ETH Bioenergia name (New ETH), will have nine plants in Brazil with the capacity to crush 40 million tons of sugar cane and ethanol production capacity of 3 million kiloliters annually in 2012. The electric power generating capacity using the crushed sugar cane residue (bagasse) will be 2700 gigawatt hours. The New ETH will become the world’s largest sugar cane ethanol producer. 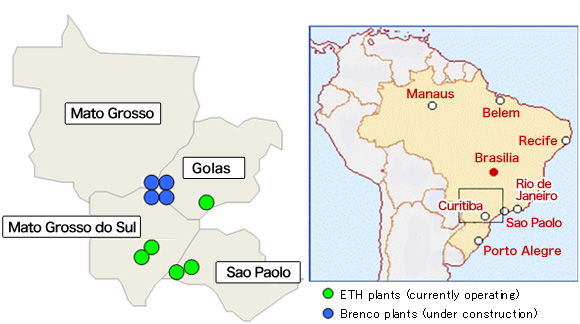 Bioethanol made from sugar cane boasts that highest greenhouse gas reduction effects in terms of energy input and output on a lifecycle basis. Brazil is the world’s largest producer of sugar cane derived bioethanol, and is a highly competitive ethanol producer from the perspectives of streamlining and cost reduction effects achieved through expansion of business scale.

Sales of flexible-fuel vehicles, which can use both ethanol and gasoline and were introduced in Brazil in 2003, are expanding rapidly, and now account for approximately 90% of all new vehicle sales. Brazil’s economy is expected to undergo solid growth in the leadup to the World Cup in 2014 and the Summer Olympics in 2016, and ethanol demand is projected to increase by 7% annually.

The New ETH will invest 3.5 billion reals (approximately 175 billion yen) to expand production facilities. The company is also contemplating exports to Europe and the United States, where demand for ethanol is rising, and is considering spending 1.7 billion reals (approximately 85 billion yen) to expand markets and raise price competitiveness by constructing a large ethanol pipeline spanning the approximately 1,100 kilometers from the production regions to the Sao Paolo Santo Port for exporting.

Sojitz has positioned environmental and new energy businesses as top-priority fields, and is committed to expanding raw material production, manufacturing, and sales of sugar cane derived ethanol from the perspective of development and securing new renewable and sustainable sources of energy to address global environmental issues.

[The Eldorado Plant in Mato Grosso do Sul]

Overview of the New Company