Once completed, the entire fertilizer complex consisting of ammonia and urea plants, power generation, water treatment, nitrogen production as well as other offsite and utility facilities will be the largest in Turkmenistan. K Plant and Sojitz will deliver the unit, equipment and materials to a construction site in eastern Turkmenistan’s Mary City where the fertilizer plant will be built by Turkmenhimiya. The complex will use Turkmenistan’s natural gas resources as feedstock to produce 1,200 metric tons of ammonia and 1,925 metric tons of urea per day.

Turkmenistan possesses an abundance of natural resources such as natural gas and oil and is one of the fastest growing countries in Central Asia, boasting a GDP growth rate of approximately 10%. In addition to natural gas and oil, cotton is also one of the country’s major exports and demand is rising for the urea fertilizers needed to grow cotton. The government of Turkmenistan is currently focusing on investments designed to boost the agricultural sector as well as the heavy and chemical industries and infrastructure. It plans to build additional fertilizer plants in the inland city of Tejen as well as the Caspian Coast city of Turkmenbasy with an eye to not only meeting the country’s own increasing demand for urea fertilizers but to export fertilizers to neighboring breadbasket countries as well.

This latest order brings the total number of orders K Plant has received for fertilizer production facilities up to seven. That figure includes two orders received from Turkistan’s neighbor, Iran, in addition to an order from Pakistan received jointly with Sojitz. This most recent order is a testament to Kawasaki’s proven track record, which gave it a clear advantage over the European engineering companies that have historically dominated the Central Asian market.

Sojitz and K Plant will leverage the know-how and expertise they have gained via their overseas operations as they continue to move forward together to win future contracts for plant construction that will contribute to Turkmenistan’s economic development and build stronger ties with Japan. Both companies will step up their efforts with a focus on making further market inroads into Turkmenistan and surrounding countries in Central Asia. 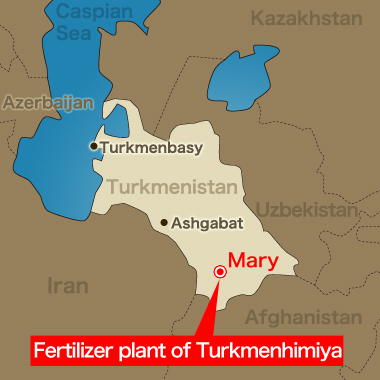